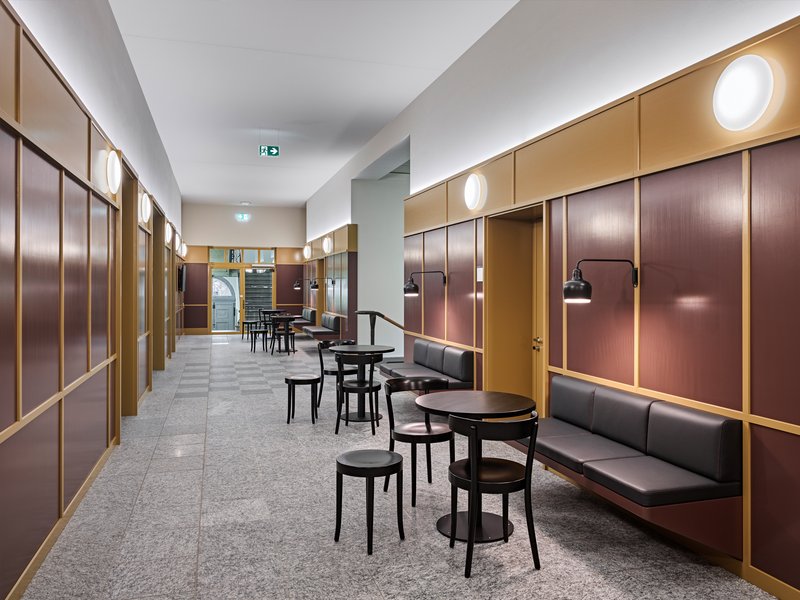 Conversion of museum into DSI Centre, University of Zurich

The rooms of the former medical history museum on the ground floor of the building that was built as a physics building for Zurich University in 1885 were renovated and various office and seminar rooms for the Digital Society Initiative, an interdisciplinary group of scientists from Zurich University, were incorporated. With the new design concept, the goal was to re-establish the original quality of the interior space originally planned by Semper’s student Otto Weber. For this purpose, the built-in furniture used by the museum was removed and, as a primary intervention, continuous wall cladding was installed. This incorporates the required functions, gives a coherent expression to the rooms and grants the new DSI Centre a specific character. The room-defining wall cladding is constructed out of timber and includes space for meetings. Additionally, it includes the necessary ancillary rooms and technology rooms, contains closets as well as lockers and serves as an acoustical purpose. Thus, acoustic ceilings were only necessary in the seminar room. The formerly sober-looking hallway was upgraded to a central, communicative lounge area with new wooden panelling and built-in benches. Two illuminated words by the media group Bitnik that refer to the phenomena of virtual cohabitation in the digital world were placed in the stairwell and the co-working space.