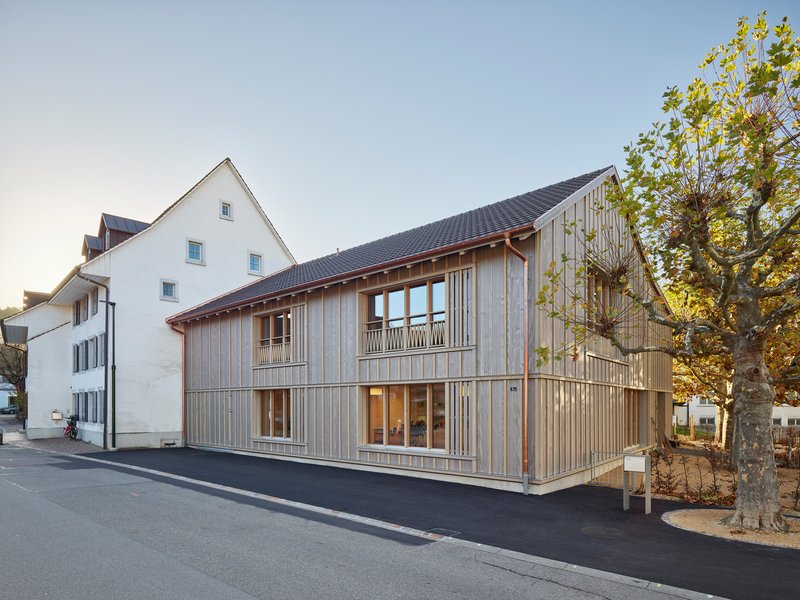 The existing row of houses on Schulstrasse has been extended by a new, double-story volume directly attached to the neighbouring listed building. The new kindergarten features a gable roof similar to those of the adjacent buildings. In a gesture inspired by many existing buildings in the centre of Sissach, the roof surface is bent on the side facing the school area. The footprint of the new volume is shaped by the geometry of the neighbouring site, the building line towards the Schulstrasse and its relationship to the schoolyard to the northeast. Internally the volume is organised by arranging the two kindergarten groups over two floors. The two kindergarten classes are stacked one on top of another to form the double-storey volume. The building is entered from the north-east side of the schoolyard through a covered outdoor space. Referencing the local arcades, this covered area expands over two floor heights. On the upper floor it features a gallery, so that the upper kindergarten group also has a covered outdoor space at the level of its main rooms. The gallery allows a visual connection between the two floors for the children. The cloakrooms, main and group rooms form a loop of mutually connectable spaces on both levels. The new kindergarten is a prefabricated timber construction clad with a wooden façade with a light horizontal and vertical grid of squared timber and a darker infill of timbers with tongue and groove joints.