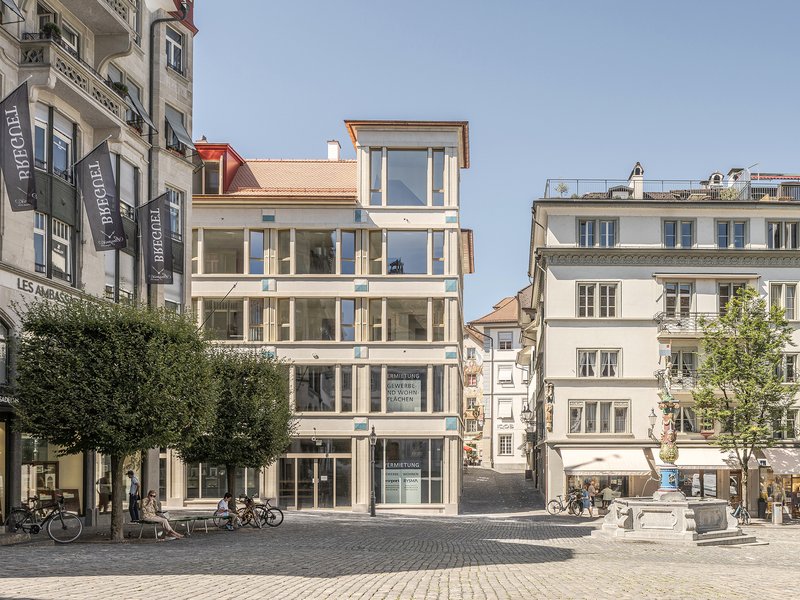 Kapellplatz is located on a prominent site at the entrance to Lucerne’s old town. In the sixteenth century there was a house on the newly developed site, the façades of which were painted by Hans Holbein the Elder. Later, various replacement buildings were erected, the last one dating back to the 1960s. In its appearance and typology, the design for the current building is based on the the tradition of inner-city department stores and commercial buildings from various eras. By referencing the storey heights and eaves structure of the building at 2 Hans-Holbein-Gasse, the new building references Kapellplatz. With its colour palette, the new building blends into the colour scheme of the surroundings and demarcates the new commercial building. In contrast to the proportions of the main building with its tectonic structure, horizontal cornices and vertical pillars and mullions with ceramic elements, the rear building faces the courtyard in a flat and simple plastered version. The façade is elegantly representative and shows a modern face on the main street, whereas the rear section of the house facing the courtyard is more profane in its design. Here, you reach the flats on the upper three floors. When you leave the staircase on the first floor staircase on the second floor, one enters a large roof terrace with a portico for the upper floors. Since there are no private balconies, it forms a collective, informal outdoor space for the 11 apartments.