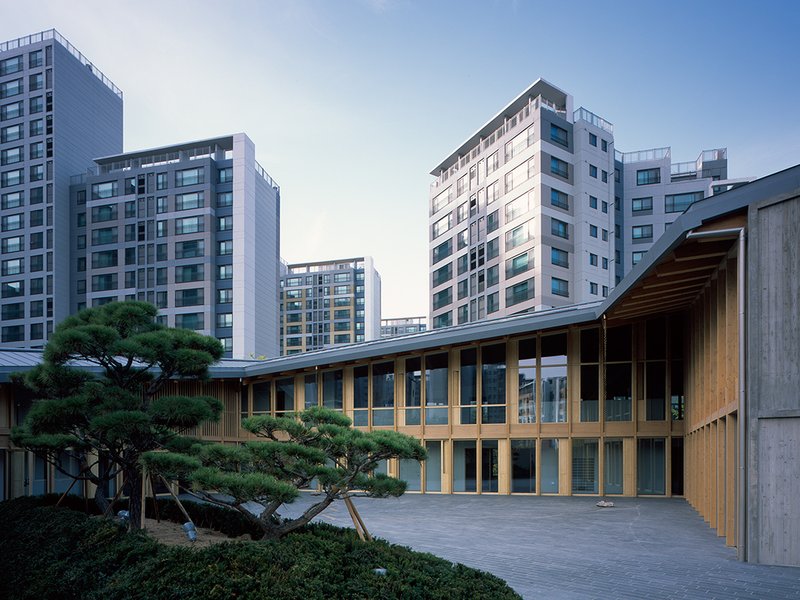 Surrounded by dense construction with residential towers, the new Swiss embassy is like an oasis in Seoul’s New Town quarter. The project is a contemporary interpretation of the traditional Korean courtyard house, which has almost disappeared from the city centre. With its spiral form, the building modestly and respectfully fits into its context, symbolising integration and openness, that which is indigenous and that which is foreign, as well as urban space and spaces for diplomacy. The ensemble develops along the building lines, beginning with the residence oriented toward the private garden, followed by spacious reception rooms and the office with a representative entrance façade that faces the street. All rooms face the interior courtyard, which has a significant role: It connects people with each other and with nature. The garden, dotted pines, ginkgos and cherry trees, emphasise the respectful approach to nature. The building’s exterior and interior design is clearly differentiated: the exterior façade is exposed concrete, while the interior façade of the courtyard is made of light-coloured timber and glass. Meticulously designed details have been implemented: The façade of the exterior concrete was formed using wood, in a manner echoing Korean handicrafts. The support structure of the façade is a mullion-transom curtain wall construction. The typical Korean timber slats provide sun protection and give rise to a wonderful interplay between light and shadow.