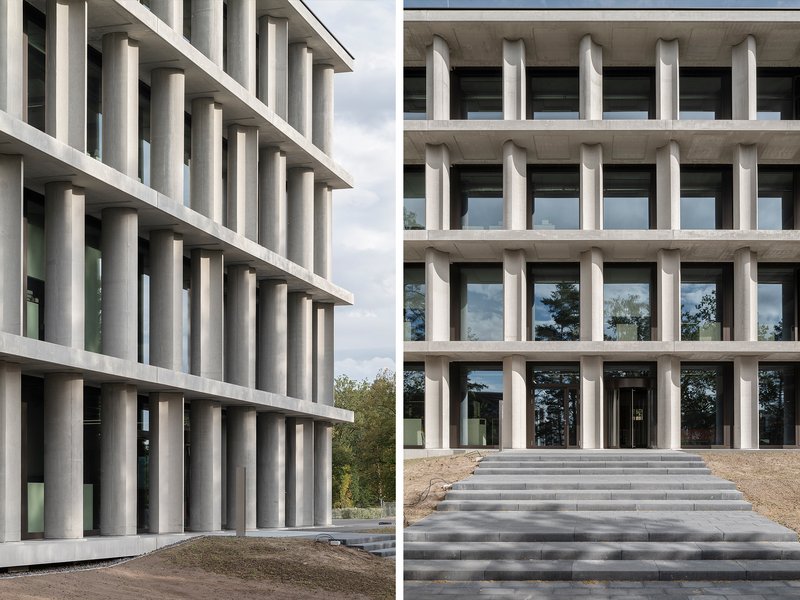 MBC 55 is the first building on the new Max Bögl Campus in Sengenthal. The new building is part of an ensemble of buildings, squares and a ten-metre-wide, north-south pedestrian axis that connects the 500-metre-long area. The industrial environment is characterised by a large, mostly closed building volume and extensive storage areas for concrete components. These site-specific characters determine the basic appearance of the design. The building is spanned by two, diagonally opposite adjoining rooms and access cores. Inserted, in between is the fully glazed office zone. In front of the façades, flush with the cores on both long sides, there is a brise soleil made of concrete columns and ceilings, which serve as sun protection. The columns differ in their alignment and the disproportionate fluting. The shaft stands on a base formed from the slope of the slabs. In the transition to the closed façade, the column is first subdivided, in order to then dissolve into structured pilasters in the core façade. The design of the stairwells is based on the raw image of the industrial landscape of the factory premises. The accent of colour, in which the steel railings are also painted, refers to the bright colour of the construction machines and vehicles. The flights of the precast concrete stairs have a reduced width in the main staircase and open up to the skylight above.