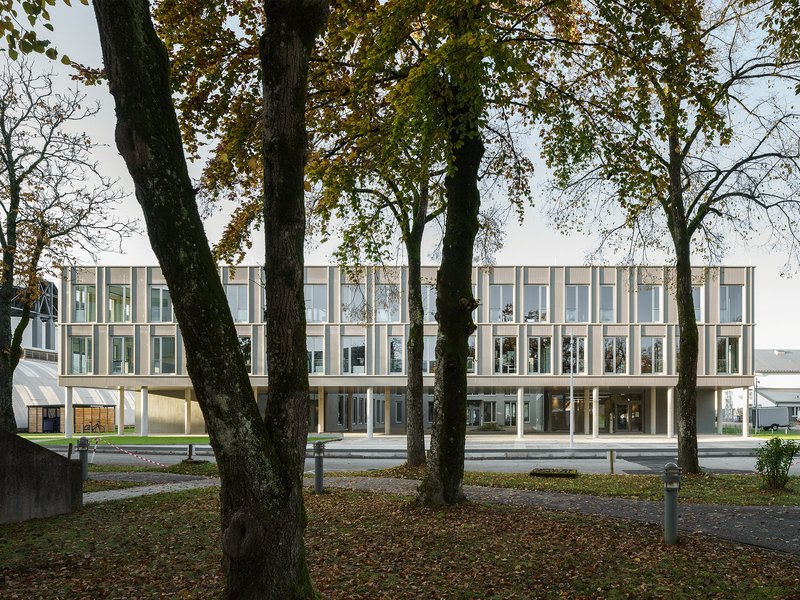 In the middle of the traditional cinema city Geiselgasteig, a new modern office building has been built in the year of its centenary. The «Neue Mitte» is a compact, triple-storey structure with a spacious inner courtyard at its centre. The section of the building facing the central axis of the site is elevated. This creates an inviting and clearly recognisable entrance area that also forms a connection to the courtyard. The building was constructed as a system building in order to achieve the shortest possible construction time and thus the least possible disruption to the film and television operations on the site. Load-bearing and bracing parts are made of concrete and steel, the façades consist of wall-high prefabricated elements with floor-to-ceiling window openings. The façade is clad with profiled aluminium sheeting. Vertical pilaster strips and a free distribution of windows create a rhythm on the façade. This gives the building a timeless, slightly technical appearance. The inner courtyard is designed to contrast: Haptic materials such as a plaster façade with a brushed texture, a water-bound floor finish and fan-shaped trees convey a calm atmosphere. In the offices, a reduced, flexible interior design is aimed for, so that the spatial units can be adapted to any office typology. Visible concrete surfaces on the walls and ceiling, as well as open installations, create a «studio atmosphere» in keeping with the company’s history and the creative environment on the site.