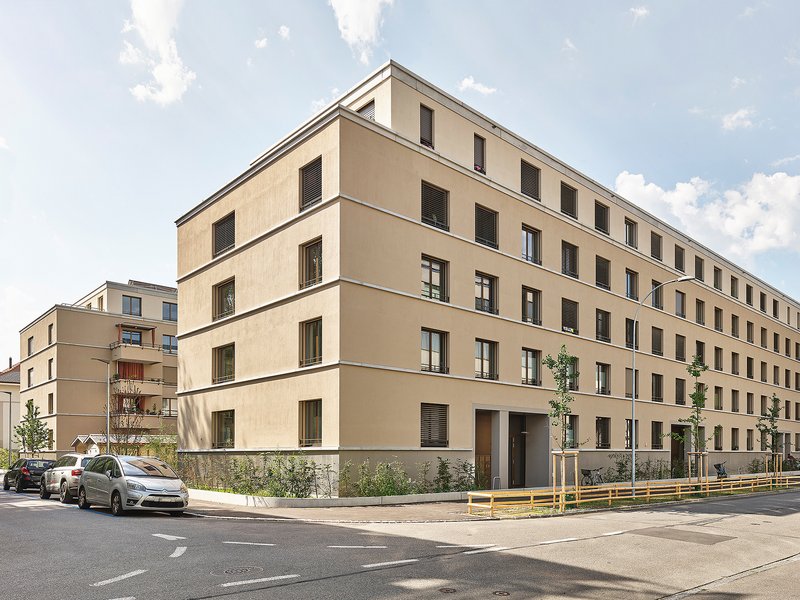 On the site of a former carpentry workshop in a residential neighbourhood in the north of Bern, 56 residential apartments and 8 multipurpose studios have been built. The new buildings take on the atmospheric qualities from the neighbourhood and reinterpret them. Existing architectural elements such as building plinths, cornices, balconies and loggias characterise the appearance. Mineral façades are consistently created with plastered, single-stone masonry. The design of the façades varies according to the orientation and surroundings. The façade on Wylerringstrasse has a strict and uniform design, here only the entrances break the rhythm of the grid. The courtyard façades are characterised by the space-forming outdoor areas of the apartments. Finally, the façade on Wylerfeldstrasse is characterised by a clear urban alignment and the exterior spaces of the apartments appear unobtrusively as loggias. The courtyard is the heart of the development. The north building is accessed via Wylerringstrasse, the southern building through the courtyard. Here, the studios bridge the contrast between private living and the public courtyard. In keeping with the urban location, the lowest residential floor is designed as a mezzanine. The first-floor apartments facing the courtyard thus benefit from intriguing spatial sequences with different levels and room heights. The orientation of the apartments and outdoor spaces towards the courtyard contributes to its vitality and creates an identity and pleasant atmosphere.