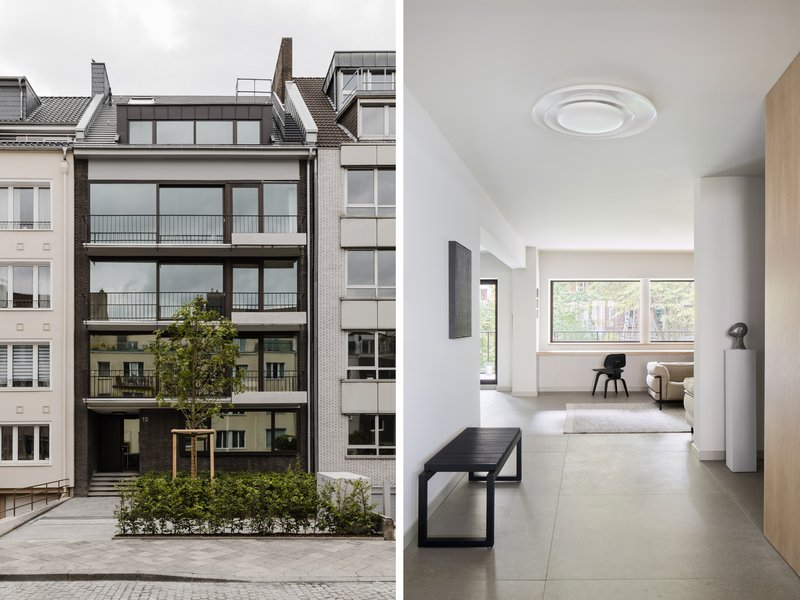 The apartment building, erected in 1955, was planned and built by Düsseldorf-based architect Bruno Lambart. It was both his residence and the location of his first architectural practice. Lambart called the house «the foundation of his professional existence» and it was to remain the only residential building in his oeuvre. It is located in Düsseldorf’s Zooviertel, a district characterised by numerous post-war reconstructions. In connection with this project, we dealt intensively with townhouses from the reconstruction years. We quickly realised that this house was a very special example. Both, the characteristic glazed façade as well as the avant-garde floor plans set this house apart from other buildings of the era. The architectural concept provides for a respectful treatment of the existing substance. The original stylistic elements were preserved and something new was added – the house was not to be reconstructed, but rather consistently enhanced and adapted to meet today’s needs. The colour and material concept is based on the dark clinker brick façade, from which the overall mood and palette of materials was derived. In addition, the building was completely renovated in terms of energy efficiency. The result is an urban building with a total of five residential units confidently telling its story while managing to take the leap into the present.