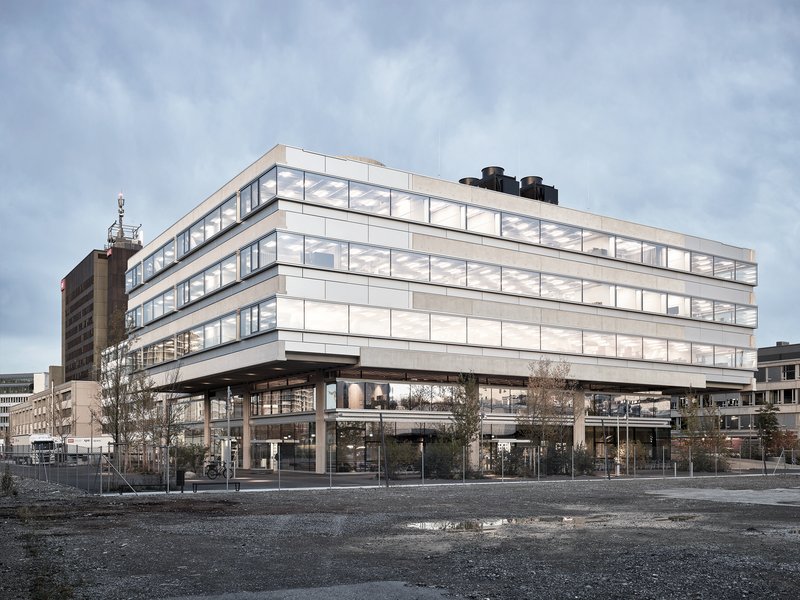 The new SRF News & Sport broadcasting building forms the first milestone in the master plan for the development of the SRF’s main area in Zurich. The programme primarily consists of broadcasting studios, the newsroom, editorial offices, a data centre and a restaurant. A large underground car park and the public «media garden» also belong to the scope of work, as well as technical infrastructure and a media and service channel. Embedded in a zone that houses broadcasting technology, a visitor’s room, a restaurant and bar, the TV studios are at the centre of the ground floor in the new building. On the upper floors an open atrium that stretches across three floors connects the newsroom, the heart of news production, with the surrounding work areas. A highly flexible structure was required to allow for future developments. With the exception of the access cores, the branching «tree supports» and the intermittent suspension cables of the ceilings, the building is free of supports. The steel parapets act as load-bearing beams suspended from the cantilever structure of the tree supports and enable the slim base of the building. The new underground car park was built using a cut-and-cover construction technique. For the geometry of the top ceiling, the terrain was given a slightly parabolic shape that served as formwork. The floor below was then excavated. For the other floors below ground the flat slabs were concreted on specially developed Pavatex pattern formwork. The media garden turns the space between the administrative and studio buildings into a high quality public space that is very welcoming and atmospheric.