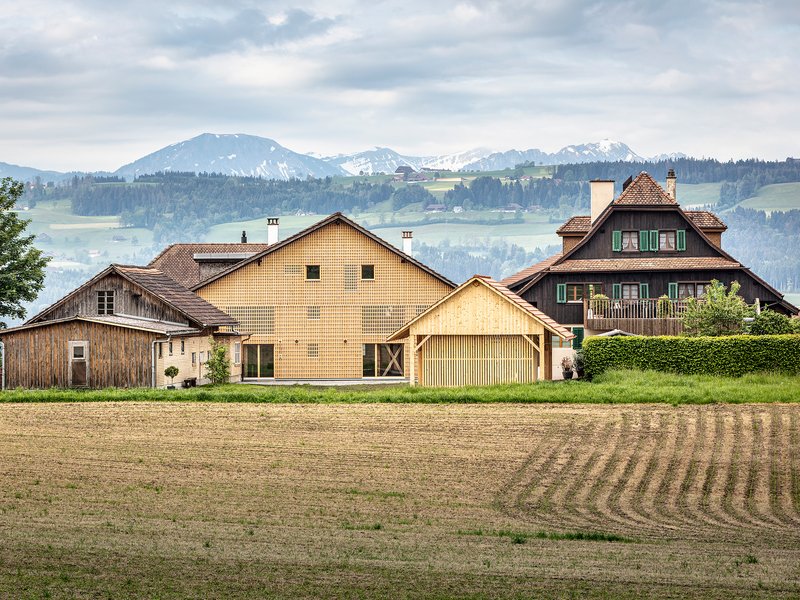 On a hill above Sempachs lies the hamlet of Kirchbühl. Over the last two years, the farmhouse from the early 17th century was adapted to contemporary living requirements while carefully respecting the building and its history. Spatial additions such as extensions were deliberately avoided. While the main façade was enhanced with spruce shingles and retains the typical appearance of a farmhouse, the northern façade looking onto the agricultural surroundings was given a more individual look. Due to the different materialisation, this aspect had a special status even before the renovation. That allowed the architects to dismantle the more recent cladding. The previously concealed timbered frame was revealed and reclad with a framework of spruce. The individual beams were carefully arranged and, instead of an overhanging roof, the transition to the gable can now be discerned through the horizontal interlocking of the elements as well as through the different widths of the two timbered sections of the support structure. Inside the building, the new wooden grid allows for variations in the spatial structure and the corresponding openings. The kitchen areas of the two residential units, set on the northern side, were thus opened to the living space above. The typology of the sequence of rooms, which is three rooms deep with a traversing passage, has remained unchanged.