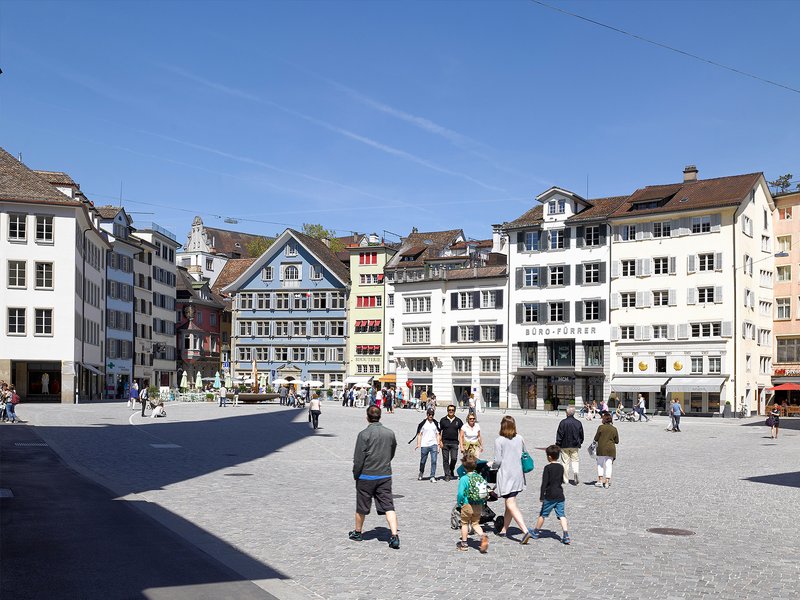 After the Swiss electorate had approved the development of a largely traffic-free square, it was possible to begin the redesign of the historic Münsterhof in Zurich. With minimal intervention, the aim was to create an open square that tempts visitors to linger and explore. A precise, geometric figure was inscribed into the heterogeneous layout of the Münsterhof, bordered by both the large-scale city blocks with the Fraumünster church and the fragmented structure of the historical city centre, in order to give the irregular square a focal centre. This figure creates zones for the square’s everyday uses and for events but also provides orientation for the visually impaired. It is accentuated by the lighting and is visible in the different forms of paving. The large bowl of the new fountain corresponds to the size of the Münsterhof. The water jet, aligned with the church tower, is visible from afar. The artificial stone, whose colour and structure harmonise with the paving and the façades, is enhanced with elements in bronze that will develop their own patina over time. As a counterpart to the new fountain a group of trees was planned in the eastern corner of the square. In the course of the redesign of the square, the approach to the Fraumünster was also adapted. The old entrance from the Münsterhof was reactivated to strengthen the connection between the church and the square.