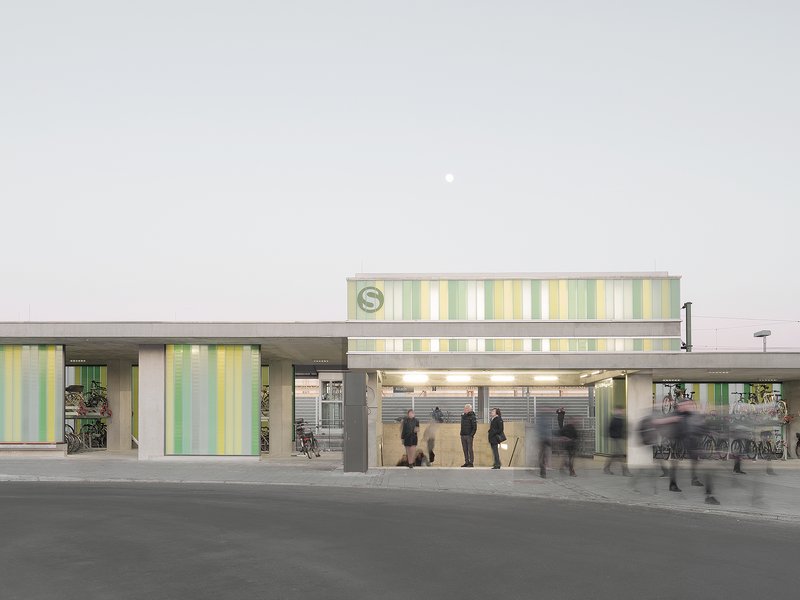 The roofs of the bus stops, a bike-and-ride facility as well as the ramp to the underground car park are not only there to protect the Oertelplatz from the elements, but are also intended to give the square its own distinct identity and make the access routes to various modes of transport – suburban railway, bike, bus and car – visible from afar. The almost 100-metre-long roof of the bike stands forms the end point of the square on the eastern side and creates a spatial edge on the side of the railway tracks. It is designed in two tiers. At the point where the two roofs intersect, a street light makes the entrance to the suburban railway visible from a distance. While 448 bikes can be stored under the bike-and-ride cover, a photovoltaic system on the roof generates electricity for the square. The waiting area for the bus stops is integrated on the northern side. The position of the park-and-ride facility roof is determined by the design of the entrance to the underground car park. It is curved and inclined and is made of the same materials as the bike-and-ride facility so that it is as unobtrusive as possible. The incline opens up a view of the flowered meadow on the planted roof of the underground car park. The choice of materials for the various elements of the façade – yellow and green profiled glass alternating with matte and clear glass elements – gives the installation a joyful, colourful appearance. Over the course of the day, the colour spectrum changes in line with the path of the sun while, at night, backlighting creates a space free of fear even in the most remote part of the roof.