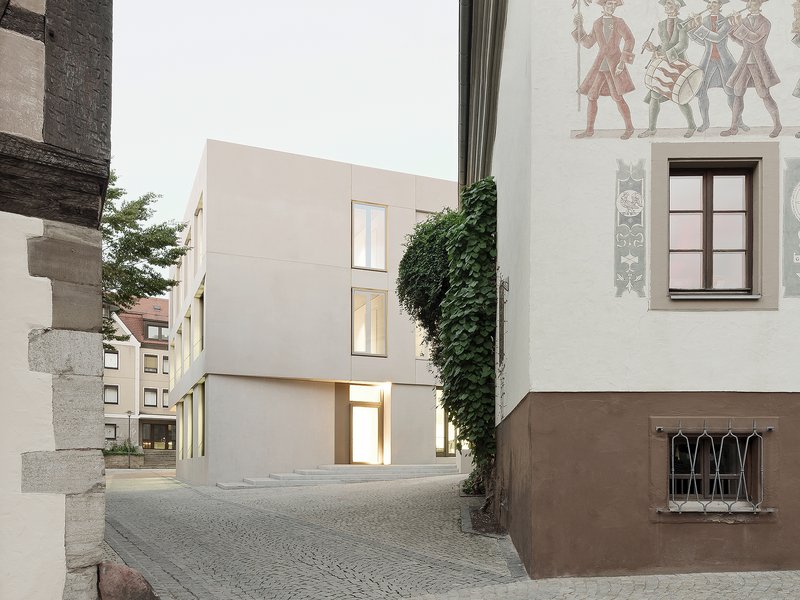 With its form of two interlocking cubes, the annex building of the administrative district office – located not far from the early 18th-century town hall – interacts with the existing, historic urban space. The articulation of its form through projections and recesses and its sculptural, tiered heights clearly associate the building with its immediate neighbourhood and the winding alleys, typical of the area, which often widen out into small squares. Thus, the existing urban, granulated surfaces and  structure of the buildings become key references for the new building. The façades, made from exposed concrete with sandstone (and limestone aggregates), are also evocative of the surrounding sandstone buildings. The base and wall recesses of the administrative district office have chiselled vertical grooves that clearly differentiate between façade, recessed panel, and base – very much in the style of its historic neighbours. Especially when seen from the town hall square, the annex does not present any massive, contiguous forms; instead, the balanced articulation and scale enable the new building to be interpreted as a familiar element of the city. As an elegant and simply designed building, the annex fits into the townscape, interweaves with the diversity of the existing structures, and nevertheless reveals itself as a decidedly contemporary building with its modern architectural language and floor-to-ceiling windows set within deep recesses.