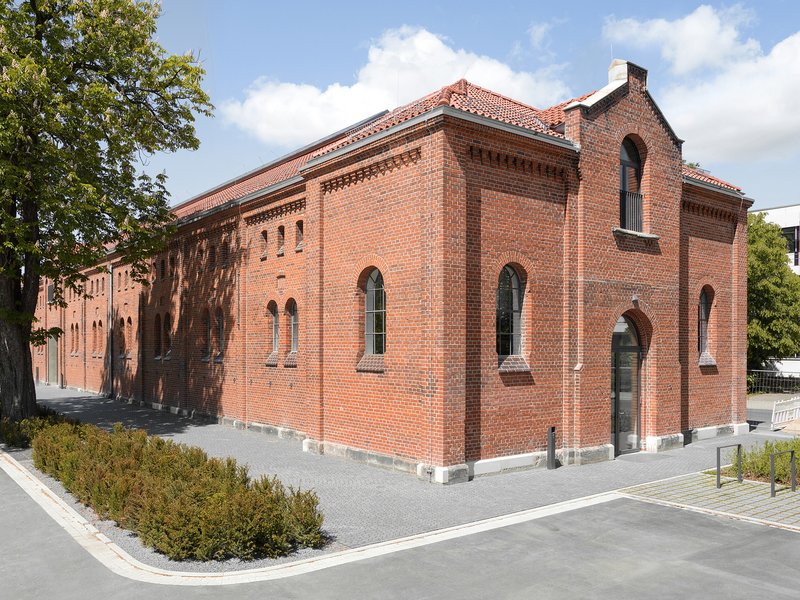 Conversion of the royal stables in Hanover

Built between 1885 and 1888 by the architects Karl Habbe and Eduard Schuster, this elongated red-brick structure is one of the few still-extant military buildings in Hanover and stands as testimony to the Prussian history of the state capital. The interior is defined by an impressive groin-vault ceiling, which is born aloft by intricate cast-iron pillars. Well-preserved feeding troughs and other equestrian details reinforce the historical character of the room. The building will in future be used by the Leibniz University Hannover as a meeting and communication centre for the arts, sciences and industry. This endeavour will centre around the newly installed, multifunctional chamber-music hall on the ground floor. The conversion and extension work to this listed building remains true to the spatial characteristics of the former stables, which are defined by strict axiality and linearity. The rooms have been kept largely free of building technology (ventilation and cable ducts, etc.). The ducts for such equipment have been integrated as underfloor installations. When renovating the façades, the aim was to carefully restore the existing structure to its original appearance without completely removing the signs of time’s passage. The patina on the brickwork has been preserved as much as possible, so that the stables have retained their character – developed over the decades – and thus their identity.