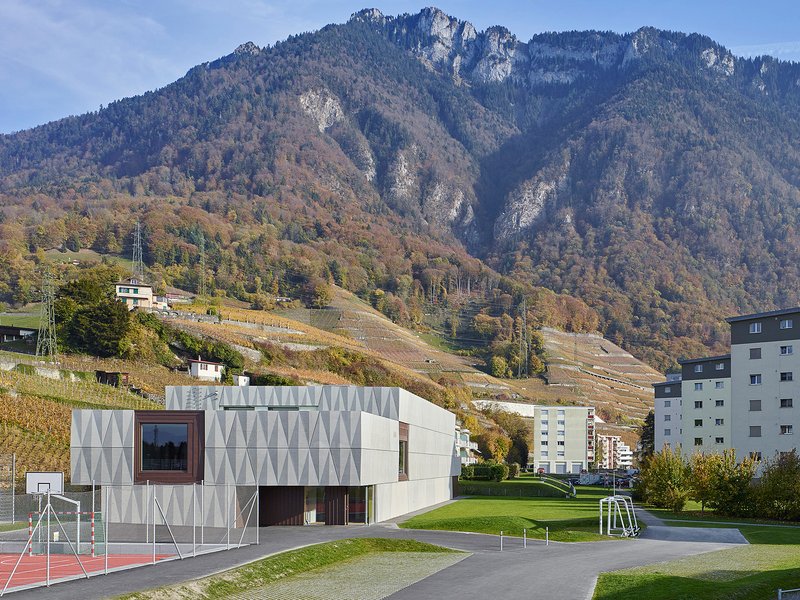 The new single-field sports hall is designed to allow for a later extension into a double hall if required. Its position on the plot, longitudinal organisation, as well as the ground floor plan and structural system permit such a step in the future. The forecourt on the eastern side signals the entrance to the building and creates a transition to the existing school complex. Like the «boa constrictor swallowing an elephant» in The Little Prince by Antoine de Saint-Exupéry, the shape of the building is determined by its interior. The form follows the minimal volume of the hall and its adjoining rooms. The scale-shaped cladding constitutes a type of shell that recalls the quarries of Mont d’Arvel, located near the project site. This shell is dissected by a few large windows. The biggest one provides a framed view of the vineyards and mountainous landscape. It is aligned towards the north and therefore ensures even and generous natural lighting in the hall while avoiding overheating and glare. The main structure of the hall consists of steel girders with a large span. This relieves the longitudinal façades of all structural weight in case the building is extended. The self-supporting façades are furthermore made of prefabricated concrete elements that can be dismantled and re-assembled if the hall is extended at some point in the future.