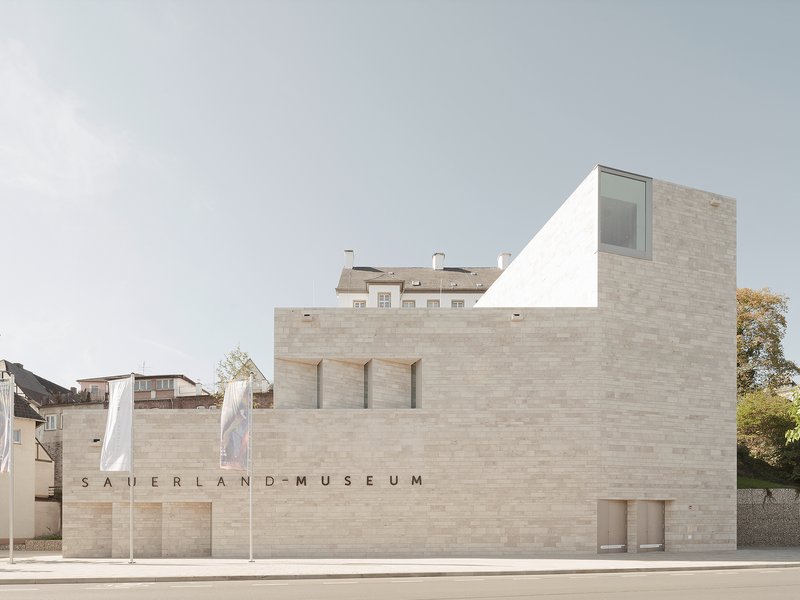 Located within the «Landsberger Hof», the Sauerland Museum has been expanded to create a museum and cultural forum. Originally built in 1605, the existing listed building has been comprehensively renovated and its permanent exhibition redesigned. The extension building, whose ground floor is set approximately 20 metres below the entrance level of the prestigious original building, has been erected on the steep slope directly adjacent to the existing structure. Cascading down the hill across three stages from north to south, the sculpture-like new-build provides a venue in which the museum can also hold high-quality temporary exhibitions. The extension building is accessed directly via a bridge-like connecting structure, which is docked to the first basement level of the Landsberger Hof and accentuated by three diagonally cut window-apertures facing the Brückenplatz square. The path then leads one to a ceiling-high panoramic window set at 15 metres above ground level and providing an impressive view over the town. By adopting the two main urban reference-points of the Landsberger Hof and Ruhrstraße, the new-build fits in seamlessly with the surrounding architecture. At the same time, the Landsberger Hof – a palace set atop the town walls – retains its pre-eminent position within the skyline of Arnsberg’s historic centre. Clad in Gauinger travertine limestone, the façades underscore the new building’s sculpture-like qualities. Individual, starkly incised window apertures create an interesting tension between the interior and exterior space.