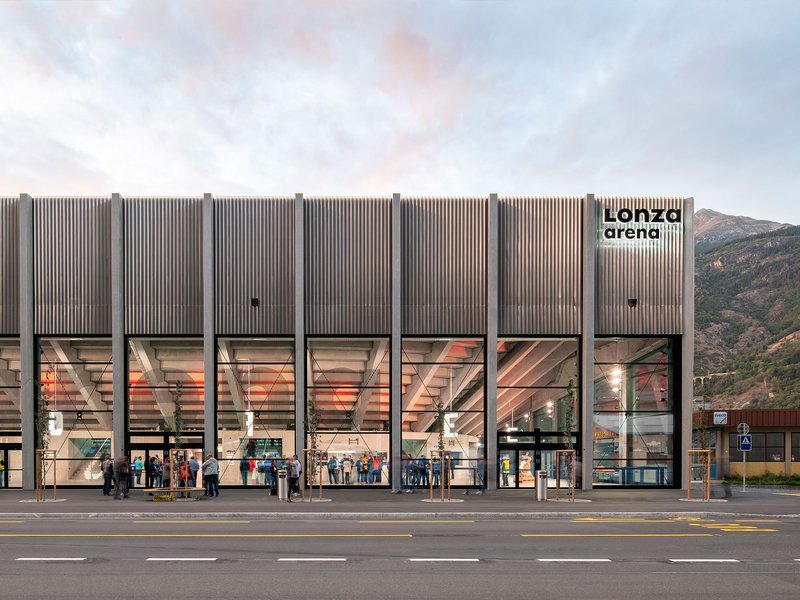 The new building closes a gap in urban development in the town of Visp. With a total area of 5,700 square metres and a building height of 15 metres, the Lonza Arena blends into its surroundings. The east-west orientation parallel to the main street and the recessed façade create exterior spaces and areas in front of the building. The transparent building envelope supports the underlying concept of merging exterior and interior spaces. While the closed façade facing the internal street of the development emphasises everyday routine, the glazed façade facing the cantonal road highlights the building’s public role. The façade blurs the boundary between the exterior and interior spaces and enables a view into the building. The ground-level circular walkway is flooded with light due to the transparent building envelope. The raised grandstand above the walkway increases the feeling of space.
The centrally arranged grandstand body forms the core of the building; its ice surface is at courtyard level. The spectator area is divided into four sectors. The area at the front is for standing only, whereas parallel to the ice rink there are seats. The hall can hold 5,000 visitors. As the first stand is raised, all seats have an optimal view of the ice rink. The backbone of the hall is formed by the multi-storey infrastructure area on the north side. This serves as access for players, athletes and staff as well as access to the restaurants. Accessed via the eastern entrance area, this allows for the regulation of separate admission for the fans.