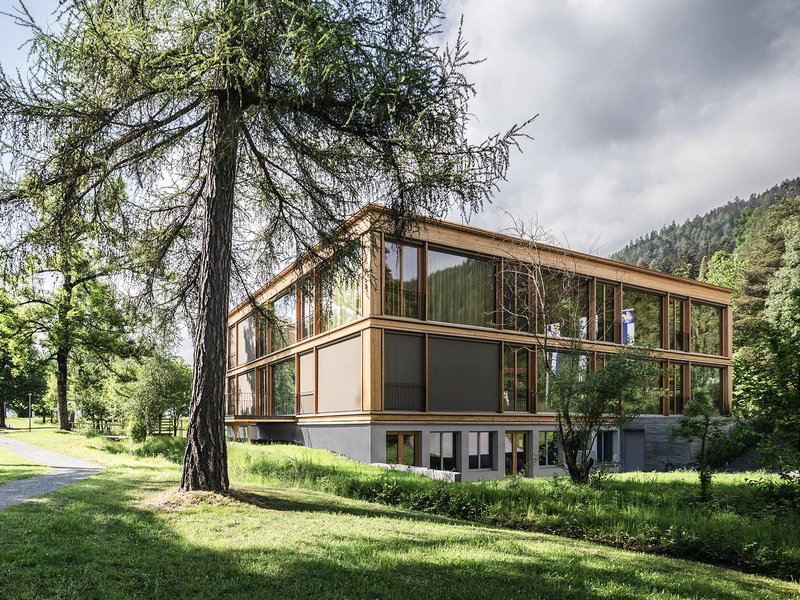 A native of Chur, architect Otto Manz built Klinik Beverin between 1916 and 1917. The independent ensemble of buildings is situated in the countryside and surrounded by trees on the outskirts of Cazis. Until the early 1970s, the clinic’s buildings were left largely unchanged, after which point various extensions were built. Haus 8 was erected in 1974 by the Chur-based architecture firm Suter as an occupational therapy centre with a dedicated sports hall. In spring 2017, the local psychiatric service issued an invitation to tender for the complete refurbishment of the building. The original virtually square floor plan meant that the rooms were less user-friendly than desired; they were very dark in the centre of the building and lacked any relationship connection to the outside world. An all-encompassing design approach was required to restructure the existing building. The guiding theme was the new inner courtyard that brings light to the centre and helps to create a clear structure and layout. Every building component bar the load-bearing supports has been removed so that the therapy rooms desired by the client are divided only by cupboards. The design was dominated by considerations about the impression the building makes on patients and how the rooms of a studio building might serve the needs of patients at a psychiatric clinic. These considerations led to the decision to construct the façade from native larch, which makes the building blend in with its surroundings.