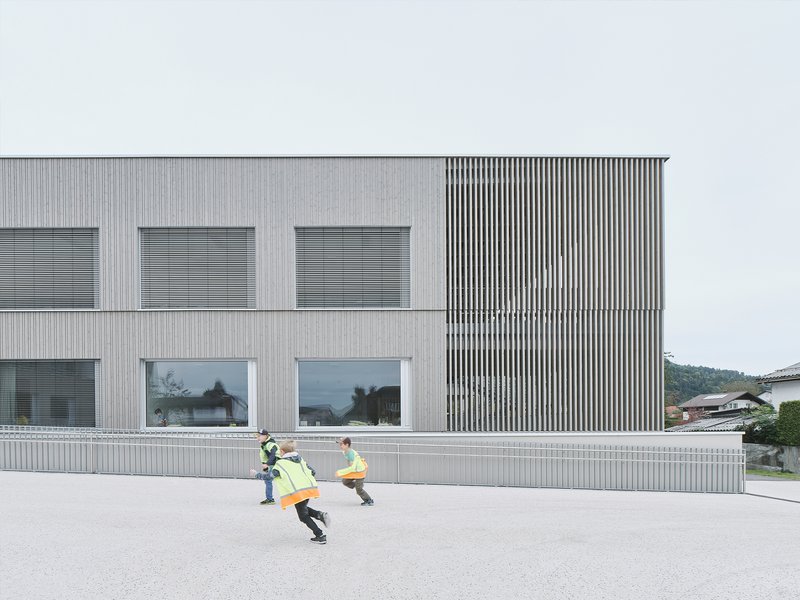 The community of Wolfurt in the Austrian state of Vorarlberg decided to expand its primary school and integrate the kindergarten. For reasons related to building physics, a part of the building that dated from the 1990s and was on the northern side was largely demolished and only the section that was originally built in the 1960s was renovated. The sports hall in the basement was retained and was built over with two new storeys. The new building was constructed with a load-bearing timber frame, an extensive, timber clad façade and a rendered plinth. Two pergolas on the front sides of the new building mediate between the inside and outdoor spaces and provide a play area that is protected from the elements. The kindergarten is located in the new building, the primary school partly in the old building, partly also in the new building. They both share a common entrance. The layouts of the kindergarten and primary school are interlinked both on the vertical and horizontal plane and have been roofed as a single spatial continuum across all floors. This innovative approach is intended to allow kindergarten children to grow into school life gradually. The layout consists of three layers: inside are the meandering communal areas from which the children have direct access to the verandas. «Squares» with built-in benches, roofed with large skylights create inviting spaces to rest, cuddle up or for children to retreat so they can concentrate. The square rooms with large windows for smaller groups make up the second layer. The third layer, finally, consists of the larger classrooms at the back with windows giving onto the outside space.