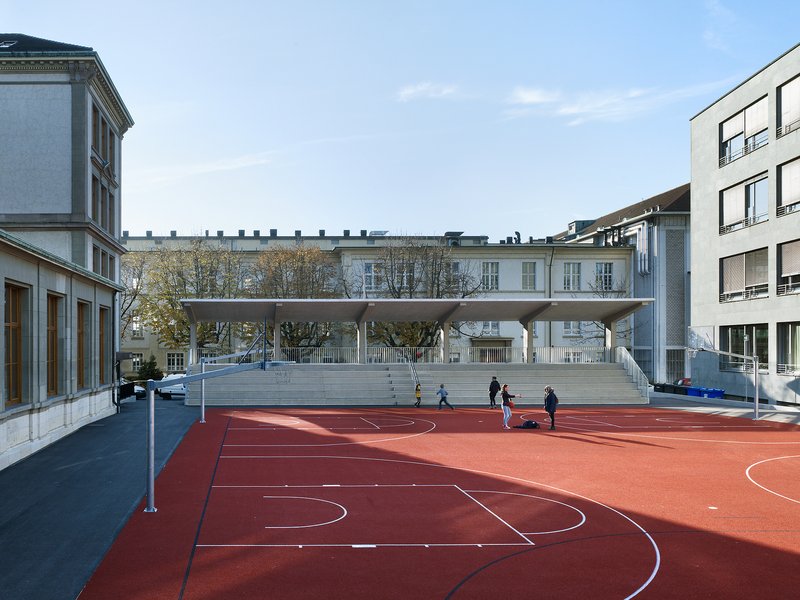 The Vogesen, Pestalozzi and St. Johann schools of Basel form an open block perimeter around a school playground with an underground gymnasium and swimming hall. Six concrete girders span the hall. Due to recurring problems with the waterproofing of the ceiling and the layout of the courtyard no longer meeting the needs of the surrounding schools, the renovation of the structure and redesign of the space was commissioned in 2017. Laid out with synthetic sports flooring, the courtyard now offers two basketball courts. The rows of seats were dismantled down to their supporting structure, renovated and supplemented with two covered grandstands, which extend across the entire width of the court and form a stadium-like space that can be used by the schools and the neighbourhood for break, sports and leisure activities. The two sunken atriums for lighting the underground halls at the ends of the square have been retained. The new concrete half-frames that support the grandstand roofs are seamlessly attached to the exterior previously non-load bearing concrete columns and are anchored into the interior concrete girders with bolts. The two roofs are highly visible from the schools. In order to avoid moisture permeating the concrete and to take into account the high visibility, the roofs were covered with the same red synthetic surface that was used for the basketball courts. Thus, the playing field is visually extended beyond the schools and makes the stadium identifiable from the upper floors of the surrounding buildings.