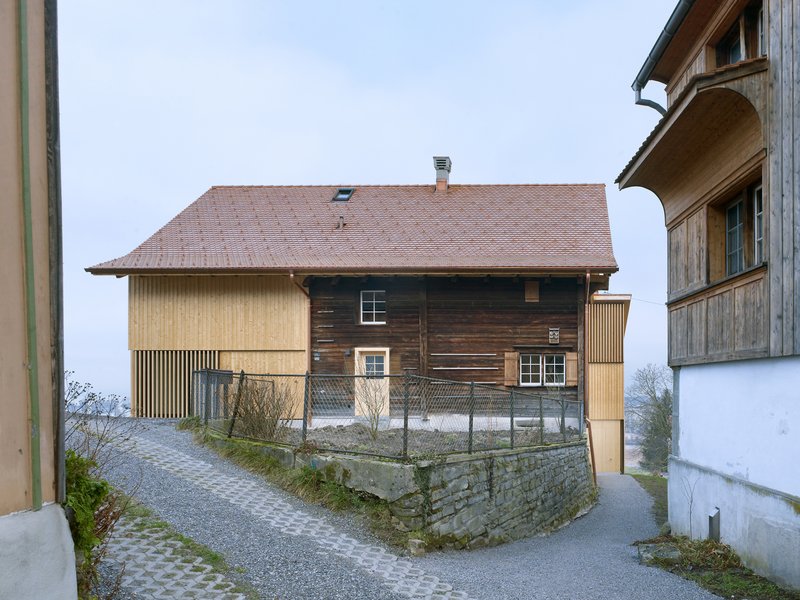 The 18th century house consists of a timber construction on a sandstone plinth and was flanked by a wing comprising a stable and barn until the 1960s. The original «Strickbau» – knitted timber – structure of the house was in good condition, however the dilapidated annexe and the west-facing exterior wall of the main house had to be demolished. The existing house was extended with a living room in the style of the former barn. The result is an interplay of space: on one side a generous new living/dining room with kitchen, on the other, unaltered bedrooms within the Strickbau structure. The central area retains its service function. It contains a staircase, an entrance hall and a bathroom on the ground floor, as well as the dressing area and a newly constructed second bathroom on the first floor. The demolished barn was replaced with a new building. The original volume was preserved, but the height of the rooms was increased and, in order to improve the views of Lake Constance, the eaves were raised. Two bedrooms and a bathroom are situated on the access floor. The open-plan first floor is used as a kitchen and a living/dining  room. The existing Strickbau wall is visible on the side of the adjoining building. The new façade was constructed with vertical cover strip boarding in the style of the traditional farm buildings of the hamlet. The windows can be covered with wooden sliding shutters. Apart from the fitting of a door, which replaces a window on the south side of the building, the original façade of the house remains unchanged.