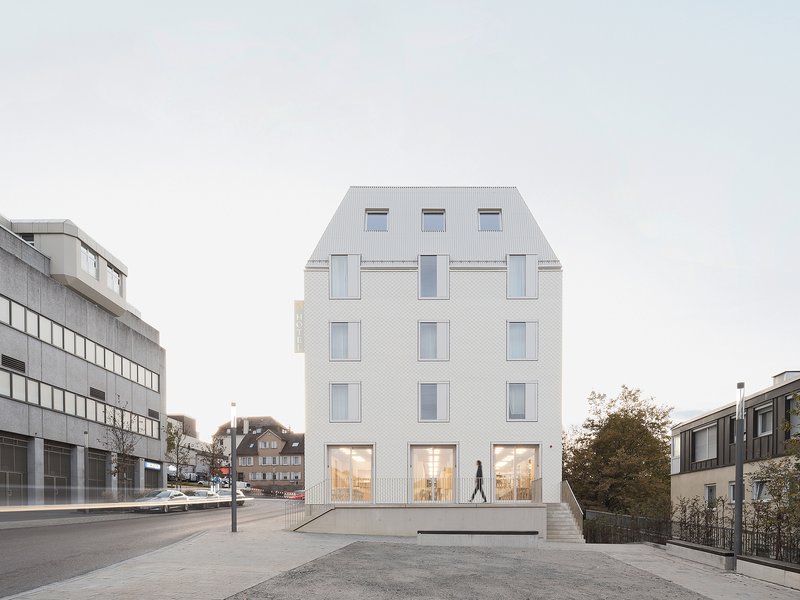 Hotel Bauhofstrasse is a consistently sustainable new building with eyes on the future. Due to a sensitive approach to urban integration into the surrounding fabric of historic buildings, the building references the height of the existing buildings and their scale. With a façade concept inspired by these historic buildings that is striking in its materiality and structure, its appearance is sufficiently distinct for the building to assert itself in the neighbourhood. The hotel thus contributes to the revitalisation of the surrounding district. By choosing the trendsetting construction principle of wooden room modules it sets standards in ecology, efficiency, construction period and quality. The modules were produced in Austria from local Vorarlberg wood, transported to Ludwigsburg and installed on site within five working days. The walls, floors and ceilings of the hotel rooms were assembled into container-like room modules at the factory using cross laminated timber panels cut to size under computer control. The concrete stairwell reinforces the structure. While the shingling with white Eternit plates does not reveal that this is a wooden building, the surfaces inside remain visible in their inherent construction and thus allows the haptic and atmospheric properties of the material to come to the fore. A total of 440 cubic metres of wood were used in the construction of the building. Due to the effects of storage and substitution, 800 tonnes of CO₂ have thus permanently been removed from the atmosphere. The result is a carbon neutral building.