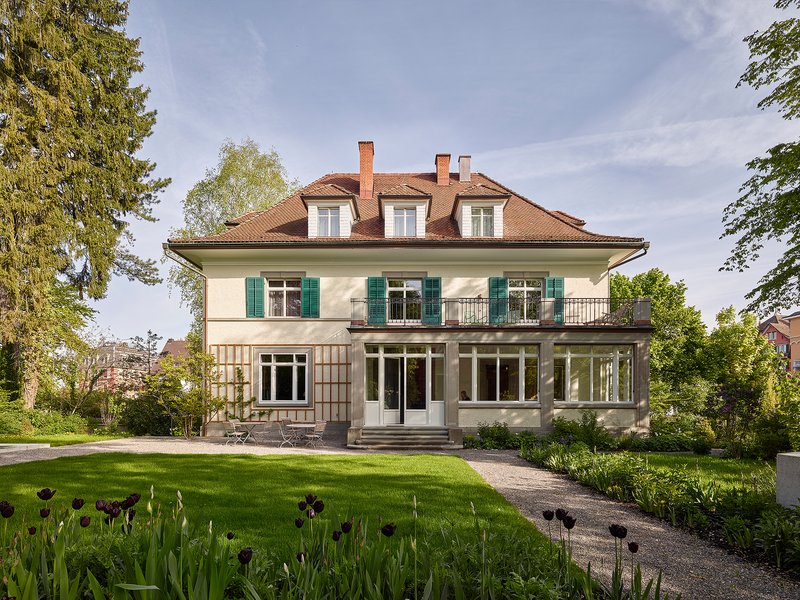 Built in 1912 by the architecture firm Pfleghard und Haefeli, the listed Villa Syz formed a spatial whole with the garden designed by Gustav Ammann, which marked the transition between the landscaped garden and the architectural garden. The garden was destroyed in the 1960s when the building was repurposed as offices. With the conversion to an upmarket bed and breakfast, the building is having its former splendour restored with the relaying of the garden, whose plantings reference those of the architectural garden. The floor plan of the two-storey villa featured a simple room layout in keeping with the upper-class conceptions of domesticity and prestige of that era. The entrance hall and vestibule on the ground floor formed a central level, with large adjoining living rooms, dining rooms and reception rooms, as well as utility rooms facing the road, which included a kitchen and cloakroom. A glazed veranda marked the transition point between house and garden. The first floor housed the private rooms and bedrooms, with additional sleeping and servants’ quarters in the attic. The conversion saw the creation of nine guest rooms. Small rooms between the larger rooms were knocked through and the resulting space divided up between the corner rooms to create the bathrooms. The sanitary facilities are now located behind the new partition walls to minimise the impact on the listed building’s structure. The common rooms – which include the newly installed and separately accessible cinema in the foyer on the ground floor – and the garden are for the use of the guests as well as for private functions.