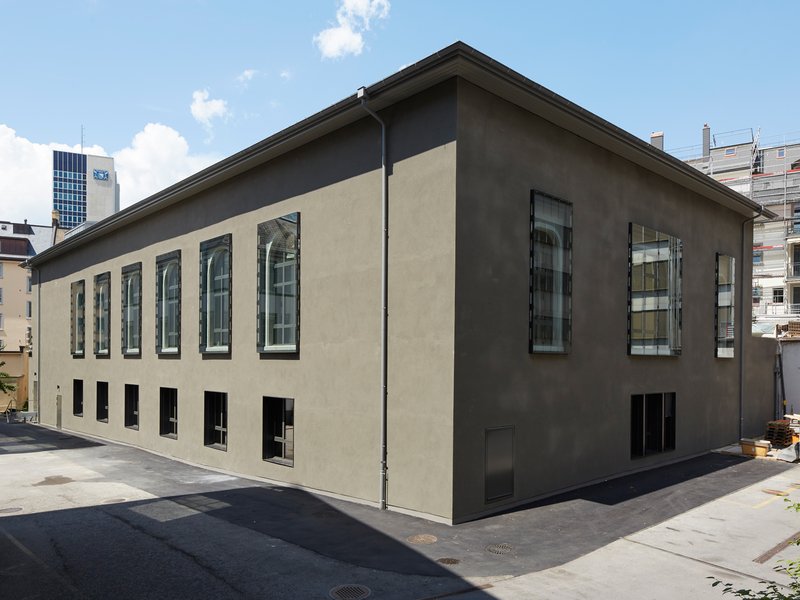 Built in 1906, the Stadthalle was for many years part of civic and political life in Zurich. The installation of a parking garage in 1949 resulted in drastic changes to the building’s structure. During the building’s most recent conversion to serve as the head office of Switzerland Tourism, both these periods were referenced as constituent elements and aligned with the needs of the new tenant. The image-enhancing passage leading into the building features an imposing, circular hinged gate and has been recreated as a golden, tunnel-like entrance tube. Inside the former hall, there are two ceiling cut-outs beneath the refurbished skylights, which serve as atria and allow daylight to penetrate centrally into the building all the way down to the ground floor. The topmost garage ceiling has been pared back along its entire length to reveal the transition between the wall and the characteristically arched, frescoed ceiling; this also once more makes tangible the space of the original horizontal gallery. The removal of the garage ceilings across the width of the arches in front of the proscenium arch and the eastern façade restores the hall’s original feeling of spaciousness from floor to ceiling. These are also the areas where the two impressive vertical connecting elements have been installed; firstly, the sinuous, serpentine ramp and secondly, the glass lift that travels through the three-storey space like a piston. In the former stage area, the façade has been opened between the lesenes to allow in daylight for the work stations and box-like meeting rooms.