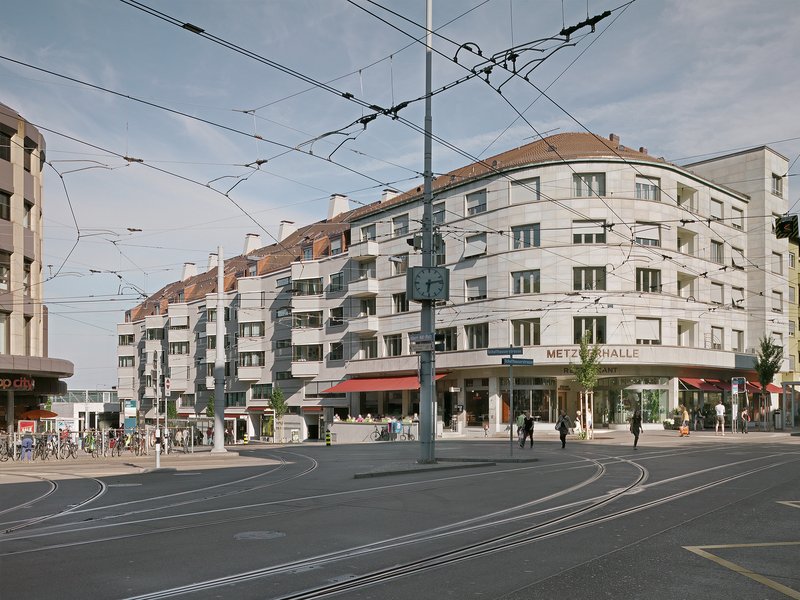 The architecturally significant «Metzgerhalle» is located in the centre of Zurich-Oerlikon, an industrial district developed at the end of the nineteenth century. This 1930s building with its rounded artificial stone façade, a largely intact, original neighbourhood pub, shops, offices and apartments was carefully renovated. Existing features were retained, reinforced and improved through targeted interventions. The adjacent site, which was vacant for decades, saw the development of a new residential and commercial building which acts as a continuation of the old building while its sculptural eastern façade creates a distinctive and elegant end point to the large-scale buildings in the vicinity. Size and structure of the buildings in the surrounding area led to the stepped division of the new building into three sections so that it blends naturally into the local topography. The aim to create an ensemble with the existing building was achieved. The shape of the roof, proportions of the windows, detailing and choice of materials produce a restrained, timeless architectural expression that blends into the existing context almost as a matter of course. The interior contains attractive shops, offices and apartments with bay windows, that capture the light from the west and provide special views, as well as balconies on the quiet courtyard side. The top floor was developed into duplex apartments that benefit from exceptional ceiling heights, quality standards and views.