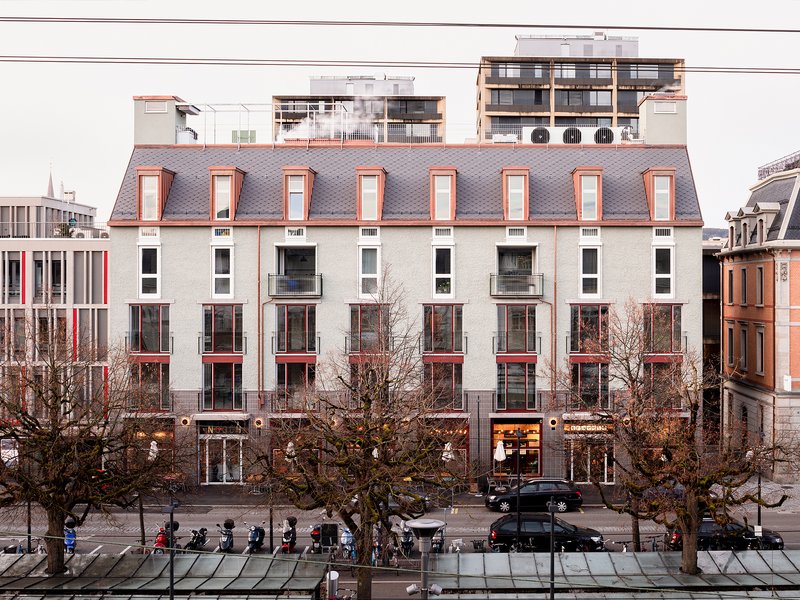 Situated directly opposite the Uster railway station, this residential and office building replaces a heterogeneous, fragmented development and closes the gap in a block between two banks: on the left-hand side, the Raiffeisenbank – the building from the 1970s was renovated in 2015 – and on the right, the Credit Suisse, which displays solid fin de siècle with a clear structure. The project continues the theme of plenty and makes it the building’s leitmotif. Diversity appears in the form of various, superimposed individual themes. The collage approach in Uster hints at a distant echo of postmodernism. The mechanics are comparable and the process quite eclectic. The most noticeable – and even unsettling – element are the vertical awnings fixed to the façade at the level of the third floor. This is where anonymous office buildings from the end of the previous millennium exerted their influence rather than motifs from classical architecture; an approach that is, on the other hand, borrowed from the toolbox of the architecture of analogy. The fact that this apartment building nonetheless looks unassuming and almost natural in such a prominent position is credit to a sensitive execution that reaches deep into the mechanics of the façade and does not just create a striking statement at surface level.