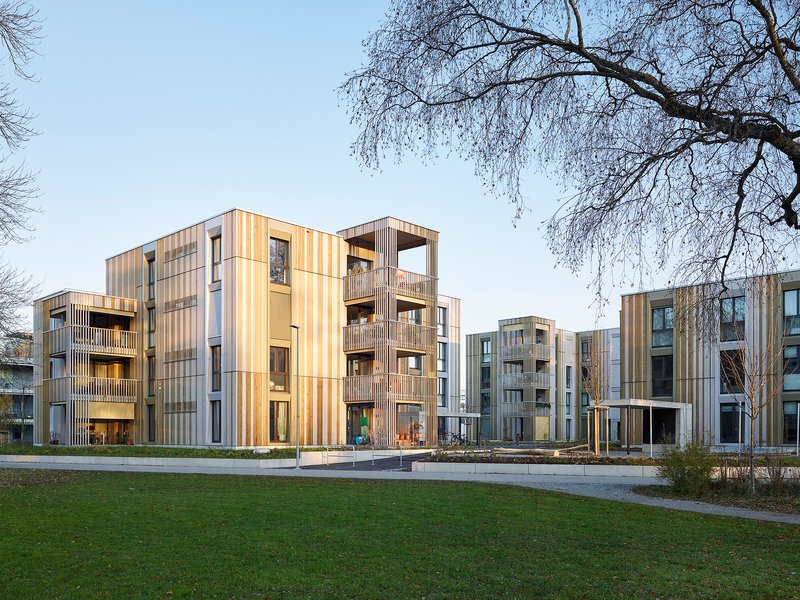 The development of the new Aarenau housing estate in the Scheibenschachen neighbourhood of Aarau began a few years ago. It is based on a design by Ernst Niklaus Fausch Partner which won the Europan 5 competition in 1999 and which stipulates a clear segmentation of private building plots and public green spaces. In its fragmentation, the development of Plot 2 references the existing «Schützenhaus» building. This is a listed building in the Canton and has been restored to its original use as a tavern. This was its intended purpose when it was built in 1924 for the Swiss federal marksmen’s festival. The «Schützenhaus» retains its architectural appearance and has been given a new wooden extension with a façade consisting of the characteristic local black and white diagonal wooden screen. Three modulated volumes feature on the edges and the centre of the building plot and create multifaceted residential and outdoor spaces. The apartments in the residential buildings are influenced by the urban fabric, have openings on three sides and a private, room-sized covered balcony. These balconies are located in «balcony towers» that project out into the shared public space of the estate but, at the same time, frame it. The façades of the residential buildings are characterised by the vertical transition from closed bands of wood to lines of metal windows. The colouring of the façades, which changes from green to brown, silver and gold on the wooden areas, the windows and the protective sun screens, references the bark of the distinctive plane trees that can be found at the entrance to the new development.