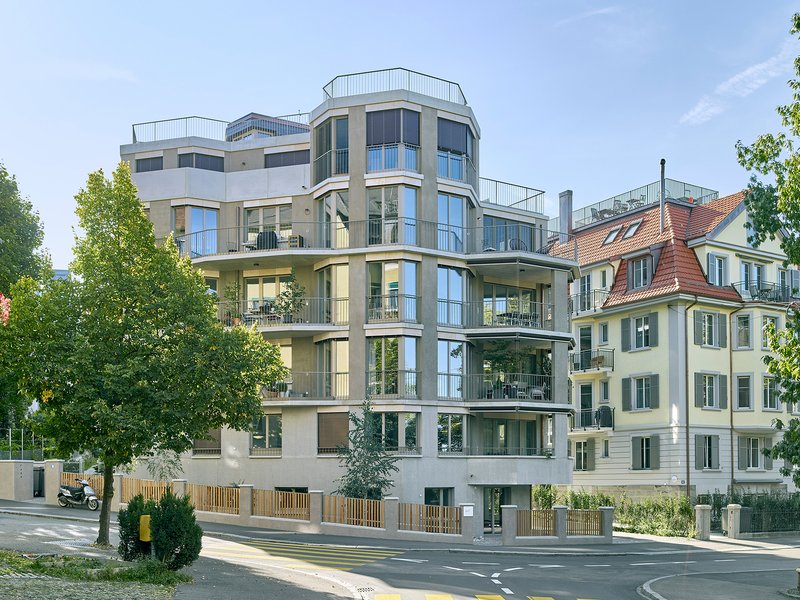 The plot on Ottikerstrasse is situated on the boundary between the Oberstrass and Unterstrass neighbourhoods of Zurich. At the end of the 19th century, the area was developed with imposing middle-class architecture that is rare elsewhere in Zurich. The eclectic fin de siècle architecture experienced its climax along Ottikerstrasse itself. The new building addresses that diverse architectural heritage. Based on the original development plan from the 19th century, it strikingly occupies the street junction, following the original building lines. The architectural elements of the surrounding buildings are referenced through the sculptural, expressively structured façade with its pronounced vertical and volumetric emphasis at the junction. The building, with its prominent fascia, has a tower-like quality, thereby relating to the architectural repertoire of the context. The side and garden façades are formulated in a much simpler way. In accordance with the neighbouring buildings, the house entrance is on the upper ground floor of the northern façade. Two apartments per floor are accessed via an entrance hall and an internal staircase. The apartment floor plans are inspired both by the 19th-century compartmentalisation of spatial sequences and elements of modern living. The careful detailing and high-quality, haptic materials anchor the building in its context.