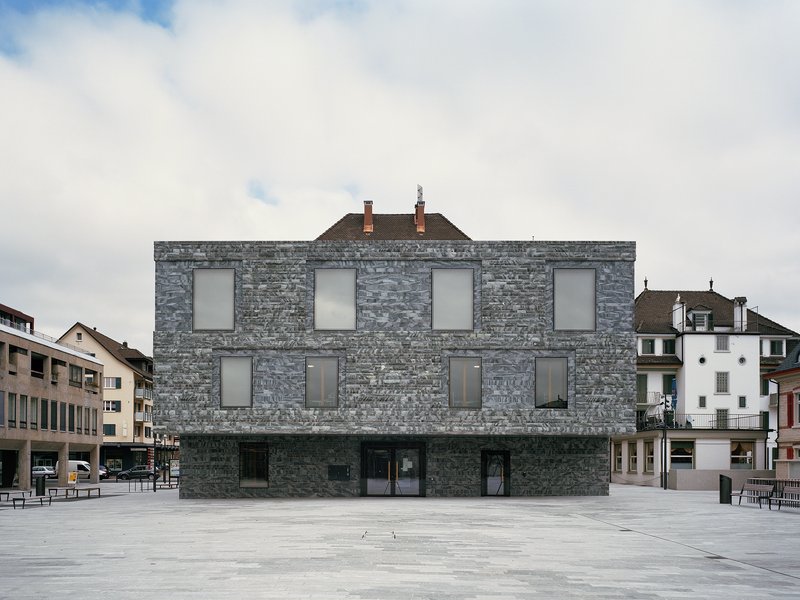 The careful almost surgical treatment of the listed building structure was at the forefront of this project. Particular attention was paid to the partial dismantling of the once open niche, which was originally used for the storage of fire hoses, as well as to the preservation of the old stairwell. This is where an atrium was created that forms the centre of the building and serves to make access organisation straightforward. A type of symbiosis between old and new led to the emergence of an extremely compact building in which all departments are accessed – both spatially and functionally – via a single central space. This makes the «inner geography» of the municipal offices clearer for visitors. Like a mask from the Venetian Commedia dell’arte, the new pair of buildings has been given two faces. The old, familiar face that looks out onto the village street and a young, fresh façade that will, in future, characterise the village square. Both faces are intended to reflect the special position of the municipal building. Village square, extension and café form a unit that blends into the existing, heterogeneous environment and gives it a new order. A new floor connects the solid, closed base of the adjacent building to the west with the entrance area of the local building authority. On the same level as the village street, it also forms the new village square. A pavilion with a café and the entrance to the public underground car park mark the boundary of the square.