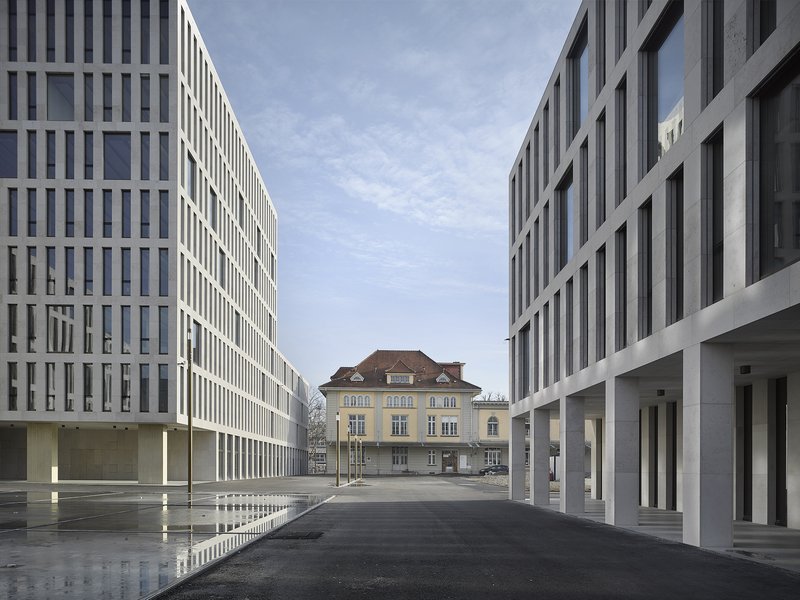 New build, renovation and remodelling of the Guisanplatz administrative centre

The site of the administration centre, which contains around 4,700 workplaces for different Swiss federal offices, is located in a heterogeneous environment between residential areas, the Stade de Suisse football stadium and the Bern-Expo fair and exhibition centre of Bern. This is where a permeable and urban city block, that will connect the different areas surrounding the site, will arise in two phases. The block follows the principles of the military installations that are traditionally located on the northern edge of the city of Bern. These are perceived as large-scale facilities, but actually consist of a composition of individual volumes that define high-quality squares, spaces and parking areas. In this way, the administrative centre creates a permeable site whose individual parts outwardly relate to existing street and building perspectives, but inwardly produce a versatile system of open spaces. The buildings that were already present on the site and had to be retained were incorporated into the new conglomerate as a matter of course. Inside the buildings, covered atria form the continuation of the polycentric system of exercise, meeting and recreation rooms. The office areas, which are dedicated to providing utmost flexibility and user neutrality, also benefit from this identity-forming quality.