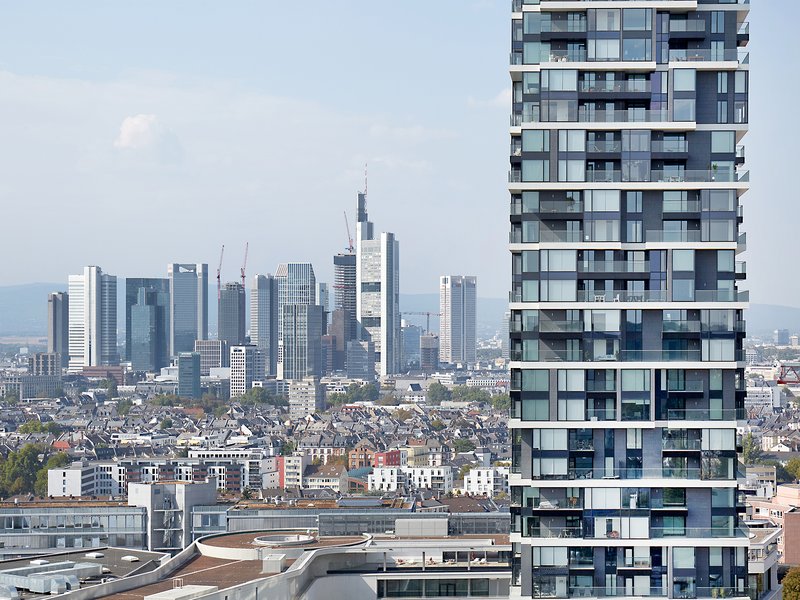 The starting point for the new high-rise residential Henninger Tower building was a sense of responsibility towards the history of the original Henninger Tower, which was a rather whimsical, but much-loved monument. It had great significance for Frankfurt and for the entire state of Hesse – and could also be described as an emotional memorial. The conceptual priority was therefore to retain or transform the image of the «Henninger Tower» in some form. The transformation of the existing structure references the exact original image of the Henninger Tower as seen from the town: a cubic tower with a superimposed rotating restaurant and its significant proportion. Although the proportions have been considerably changed, the principle of the imagined pseudo readymade works in the collective perception – for the population of Frankfurt the Henninger Tower is back. On the façade of the town-facing aspect, the windows of the existing structure were cloned and reproduced. Towards the south, west and east, the façade is characterised by the building’s new use as a residential high rise through a variation in style and by opening the apartments to the view. Balconies placed in front of the apartments in colossal order surround them on three sides and provide a generous amount of outside space. Partial windscreens and winter garden areas allow for different protected uses. A two-storey loggia acts as the transition between the apartment interior and the expanse of the urban space.