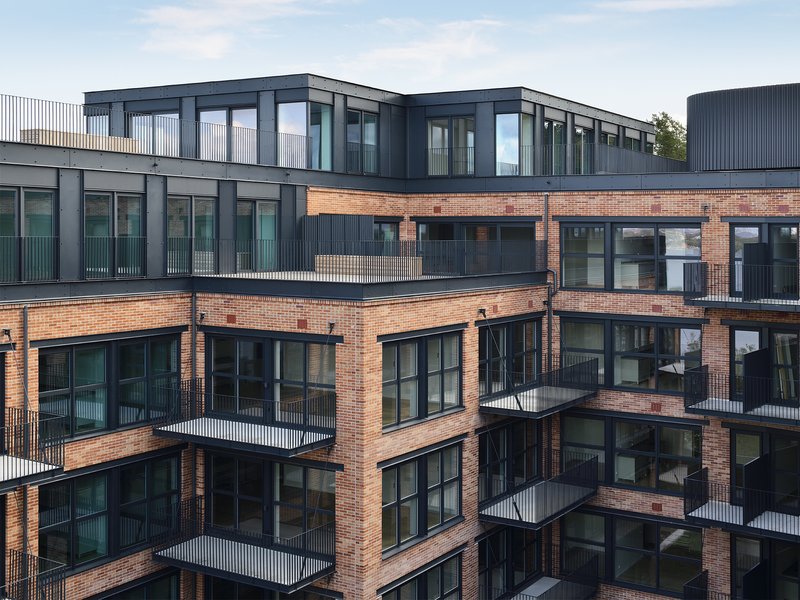 The No4 project consists of a conversion of an existing office building in Nacka Strand into housing with 210 apartments and a preschool. The conversion included the complete interior reorganisation of the building from a monofunctional office building with large open floorplans into a residential building with almost 70 different types of apartments, ranging in size from 35 to 180 sqm. The existing building was constructed with a prefabricated concrete structure with a brick façade built in situ, and some interesting façade details such as steel beams over the window openings. The exterior envelope was mostly retained, but all window openings were enlarged, and new window openings were added within the logic of the original façade grid. The brick and the steel beams were also retained, and new windows, balconies and steel façade pilasters were added to the remodelled part. On top of the building’s stepped form, one-storey superstructures have been added, with prefabricated steel frames and specially made façade panels made of bent steel plates with distinct flanges and bolts. Through the façades of the superstructures and the other steel details around terraces, balconies and railings, the building is characterised by a meeting between existing brick and added steel. The crown of steel that the penthouses constitute relates to a kind of romanticised industrial memory of the former factory environment in Nacka Strand.