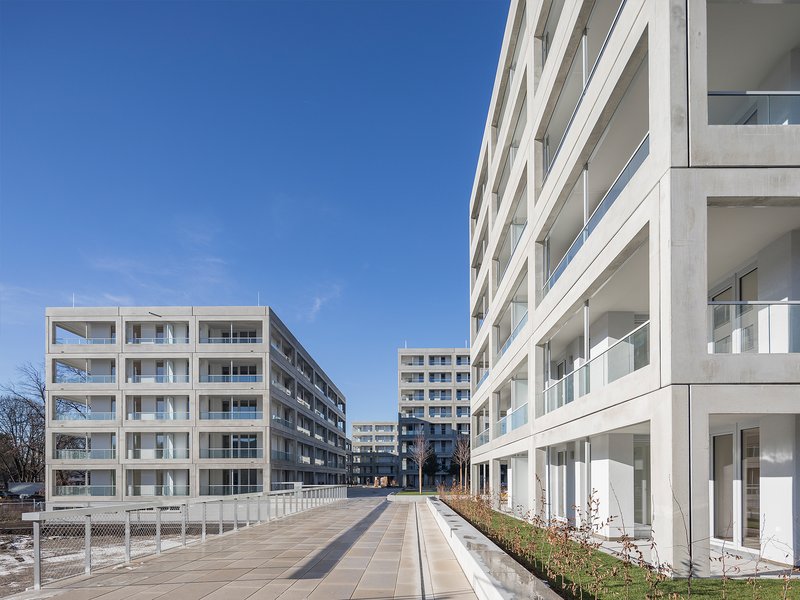 The new housing complex is part of a new residential area that has been developed on the former car park of the MAN company where 1,400 cars once stood. The new buildings are located in the area’s public park which was formed by including existing trees that were worth preserving.

Different building types make up a «house family». Despite their distinct shapes, the buildings are related in their volumes and design and create individual entities in a coherent setting.

The buildings are connected to the «esplanade», a platform that is raised above the park’s green spaces. The «esplanade» was created as it was impossible to build any underground parking because of the high groundwater level. The necessary parking spaces are integrated into this platform which forms the basis of the lively courtyards with their playgrounds and clumps of trees.

The differentiated cubatures create varying spatial references and allow for optimal exposure to the sun and ventilation of the apartments. The freestanding buildings face green spaces on three sides and each have one side that faces the courtyard, which forms the spatial centre of the neighbourhood. The balcony loggias are made from prefabricated reinforced concrete parts and surround the building on all sides. They create a transition zone between the apartment and the outside space and vary in their detailing and proportions. The width of the concrete frame increases with the height of the building and so reinforces the perspective effect of the building structure.