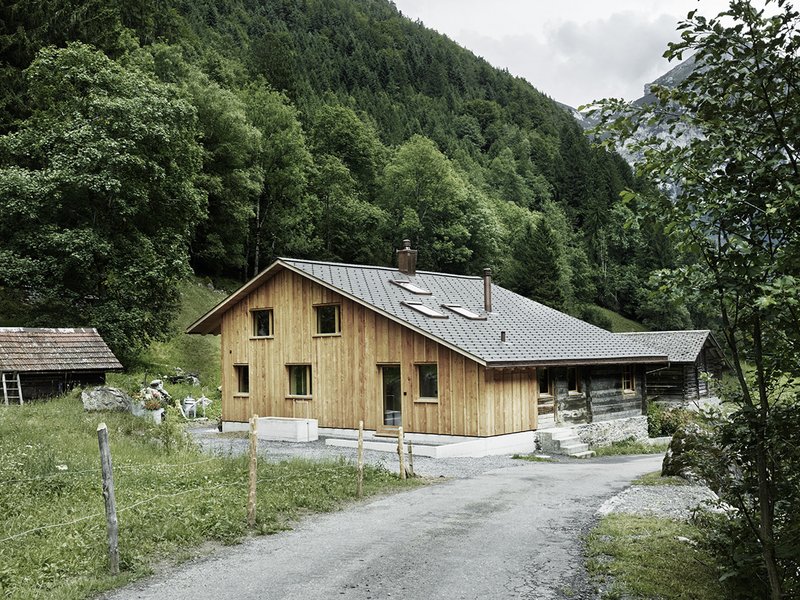 Renovation and extension of an old Alpine farm

The Sagerberg project showcases the renovation of a historic house from 1753 that was part of a former Alpine farm, which has been turned into a house and holiday home with two apartments. Structural and architectural impurities have been removed. The house has been extended towards the west and the development stages of almost three hundred years of building history are once more visible. Although the house was structurally sound before the renovation, it was in a desperate, barely habitable state. The character of the existing building with its low ceilings, fire wall, low lintels and thresholds was a central element that was integrated into the design and was then developed further. The extension towards the west follows the cross section of the building and thus makes it possible to retain the heavily weathered former western façade that was badly in need of renovation as an inner wall. The inner walls of the «Strickbau» log construction have been exposed while the exterior walls have been insulated and re-clad on the inside. Cladding elements that are joined to the ceilings and floors contrast with the supporting structure. These cladding elements recall the former panelling but are nonetheless unique new interpretations. The objective has not been to copy but to contrast old with new, ensuring they co-exist respectfully. This gives each building component the required presence to allow the individual elements to meld into a single expressive overall project.