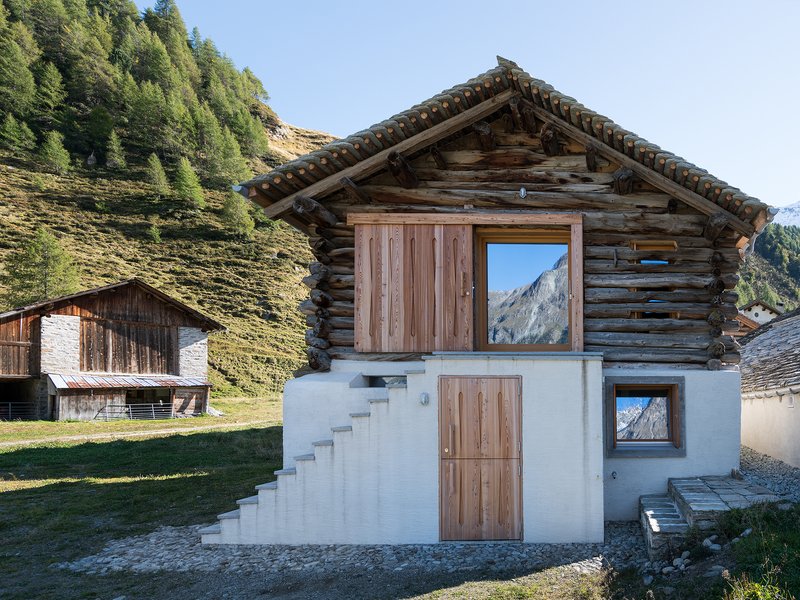 The project addressed two themes: the conversion of a barn with a hayloft into a habitable building and the remodelling of an adjacent but independent farm building originally used for the production of cheese. The two small structures are now connected by means of a sunken passageway rendered invisible from the outside. Despite a number of features that allow them to be read as one project, the two buildings were dealt with autonomously. The distinction lies primarily in the feeling that the internal space and the materials communicate to the visitor. The barn has a stone base, reinforced and plastered in lime and cement and finished with lime mixed with very fine sand. The upper storey is a hayloft in interlocking logs inside which a room in solid larch has been «inserted». The farm building retains its original position and structure, but the plastered stone wall has been replaced by a new wall in concrete, insulated and plastered. The interior is exposed concrete, obtained using white cement. The windows echo the originals, which were much smaller and cut obliquely, the exception being one large window that frames a view of Lake Maloja. Here, all the woodwork is in oak. The exterior is plastered in lime and cement, which was then scored the day after its application to give it the rough look of a mountain cabin. The continuous flooring in both structures is in beaten concrete.