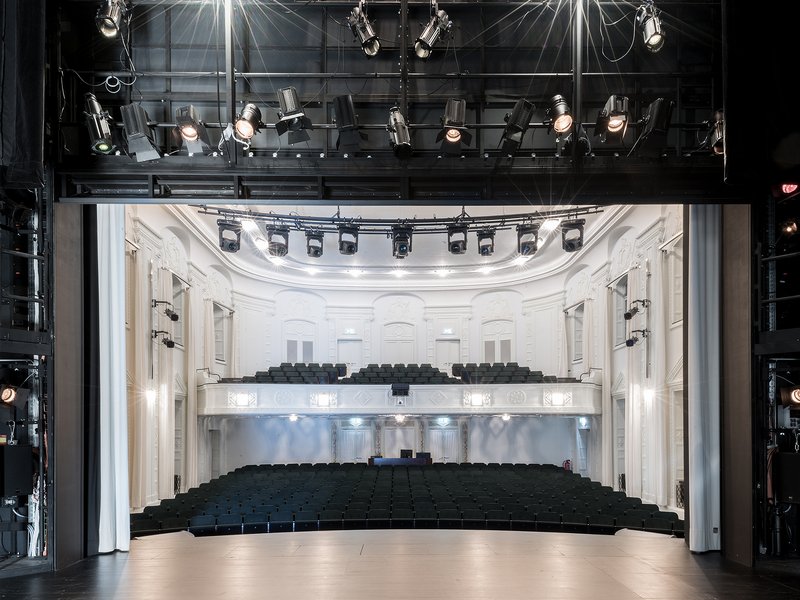 Refurbishment of the Stadttheater Langenthal

The municipal theatre no longer stands as it once did on the outskirts of the city. Urban growth has shifted its setting more towards the centre of town and the theatre was unable to live up to this newly acquired prominence. Moving the entrance from the west to the north side with its temple front complete with tympanum relief gives the theatre a more imposing presence. At the same time, the internal organisation was adapted to meet the needs of today’s theatre visitors and operations. The new structural engineering concept is based on the existing structure. Load-bearing walls on the ground floor were replaced by beams to create the necessary space for two new stairways down to the basement. The auditorium was newly furnished with three hundred comfortable seats. With the restoration of the original colouring, the hall with its stucco ornament, reliefs and capitals regains its dignity. With one hundred seats, the gallery becomes a theatre box. The stage was equipped with motorised understage and overstage machinery. A large goods lift accessible directly from street level on the south side of the theatre connects all floors except the attic. The theatre was extended by a fourth hall in the form of a Black Box for various uses such as small theatre productions, readings, cinema, chamber concerts and so on for up to 120 guests. The dressing rooms are distributed across the basement, ground floor and stage level of this annex.