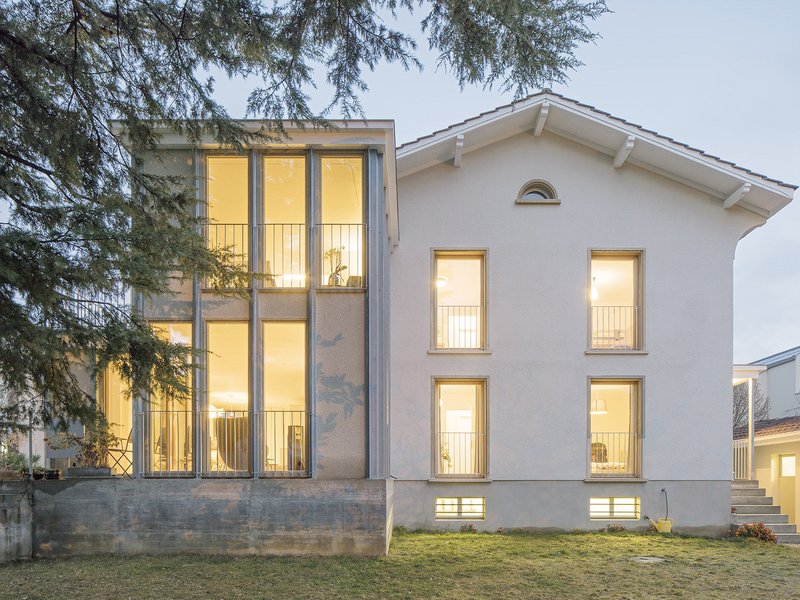 In order to densify a neighbourhood of villas, a house built in 1954 was transformed and enlarged to accommodate two apartments sized 112 and 101 square meters. The built area was thus increased by 45% and its density by 30%. Inspired by grouping two families of co-owners, the concept of intervention is based here on «interbreeding».

This principle is expressed by the blend of architectural characteristics between the existing house and its extension in order to give an impression of unity. The extension takes the form of two new volumes: one on the east side, which repositions the entrances, and one on the west side, which adds daylit space to both apartments. The junction with the old building is through the arched door that initially led to the continuous balcony. Wishing to preserve the relationship between the interior and the exterior, the extension is conceived as a large veranda, keeping the old façade inside the new volume. Apart from a few minor modifications, the original house was kept as it was. Following the «interbreeding» principle, the characteristics of the existing house were transmitted and reinterpreted in the extension (the concrete base, the decorative stone frames, the vertical proportions of the French windows, and the cornices made of painted wood). And in turn, several elements of the extension such as galvanized steel pillars, oak windows, etc. colonize the existing house.