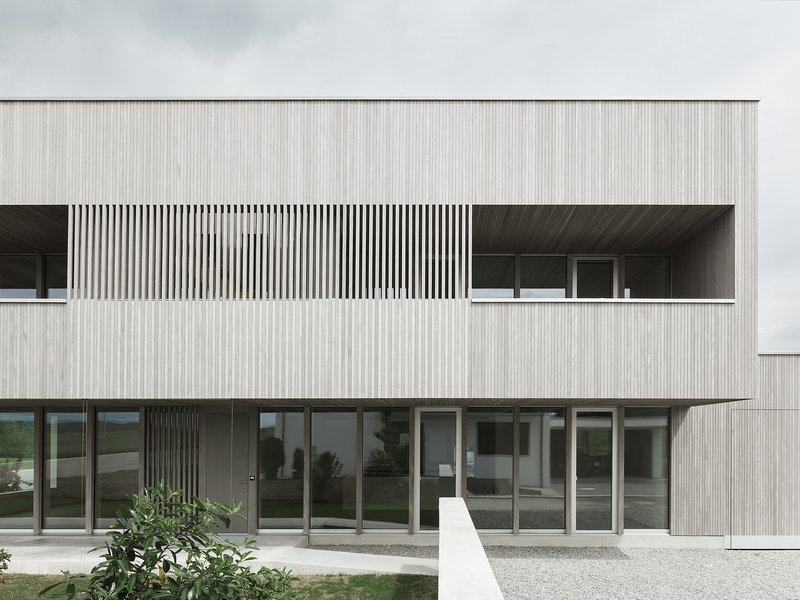 The two-storey house has a floor area of nearly one hundred square meters. Within varied surroundings, an elongated building was set directly on the north-east boundary of the property. The house faces south towards the garden and has an agricultural zone to the west. The architecture consists of a wood structure raised off the ground atop a concrete plinth. Staggering the volume created outdoor spaces of varying character between the skin and core. These are used as seating areas and a garage and serve to extend the interiors to the outdoors. They offer an additional layer of privacy, set like a filter between the house and the neighbourhood.

The building with its generous, multi-part glazed surfaces towards the south is divided into two living levels. The centre of the house is the entrance hall with a staircase to the upper floor. Here the wooden ceiling of the ground floor has been cut out between two bays so that the space opens up to the roof ridge, connecting the ground and upper floors. In the open floor plan, the entrance hall forms a break separating two functional areas – the living room on one side and the kitchen with dining room on the other. Timber frame construction was used, with a visible wooden beam ceiling. The façade is made of narrow pre-greyed white-fir strips arranged vertically. At the openings in the north and south, every other strip was left out to create a kind of screen towards the neighbourhood.