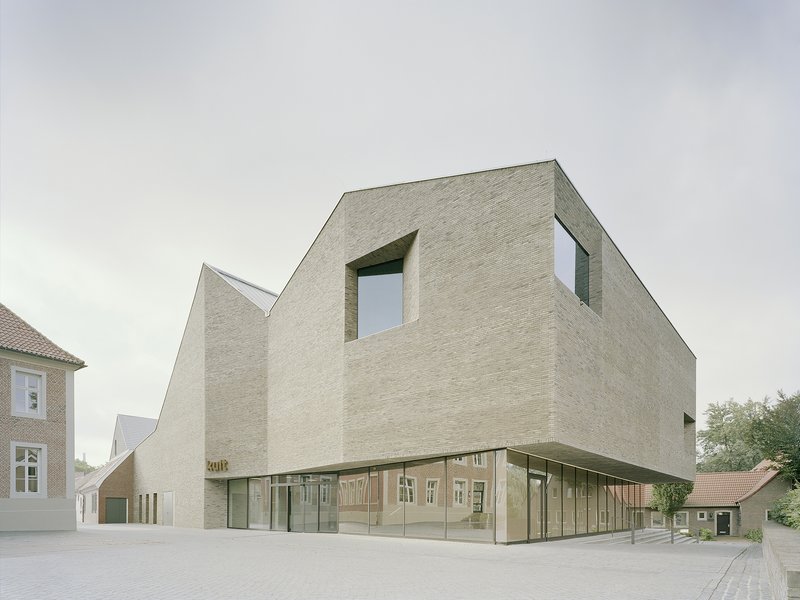 The «kult» unites the local museum, educational facilities, local archives, the tourist information office and the cultural administration for the county of Borken, near the Dutch border in Westphalia. It fuses four existing buildings from the 14th and 16th centuries and the 1970s and 80s, weaving them together with two new volumes to form a new whole. A new urban «cultural route» runs along this border, leading from the outskirts of town over the bridge and into Vreden. At this point, the route crosses the «kult», bringing visitors into the atrium, the heart of the centre. Four axes open up from this point. Next to the two entrance routes are views along the central street into the depths of the building and upwards into the museum levels. Here, in keeping with the museum’s siting, the exhibition takes up the theme of the border: On the first floor, the open staircase leads to the secular part of the exhibition, where corner windows open onto a view of the medieval port. On the second floor, the clerical part of the museum, the stair points to two windows that display the town’s two churches. While the exterior is clad in the local brick, this is peeled away on the inside to reveal the concrete structure with its rough texture left behind by the planking. The pre-existing buildings are clad in the same brickwork as the new wings, but in subtly differing shades. The expressive formulation of roof and façade integrates the alignment of the original buildings and reflects the medieval urban grain.