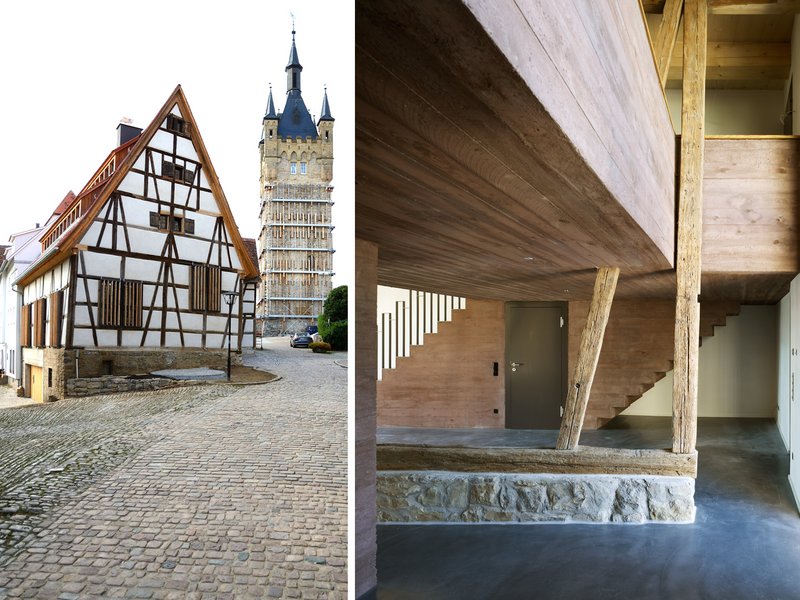 In the castle precinct of the historic market town of Bad Wimpfen, directly opposite the Stone House and the Blue Tower, once part of the Hohenstaufen castle, a barn complex recalls the erstwhile agricultural use of the castle precinct. The prominent half-timbered gable of the tall barn set on a corner has been a landmark on the townscape since the beginning of the 16th century. In the 18th century an annex was added to the barn, which is today a protected monument.

Entering the barn, which was at imminent risk of collapse before its conversion, the visitor encounters a soaring space that could once be accessed directly from the castle and which features a large opening in the centre of the ceiling that was formerly used for a hay lift. In order to stabilise the barn and enable the new residents to enjoy modern living standards, a concrete sculpture was inserted that divides the high space into zones on the ground floor and also adds a new intermediate level. An elevator was integrated in the opening for the former hay lift to allow for maximum accessibility of the entire building. Two independent units could thus be integrated into the structure, with the attic unit also accessible from the ground floor via a private closed staircase. The basement holds a shared garage and utility rooms.