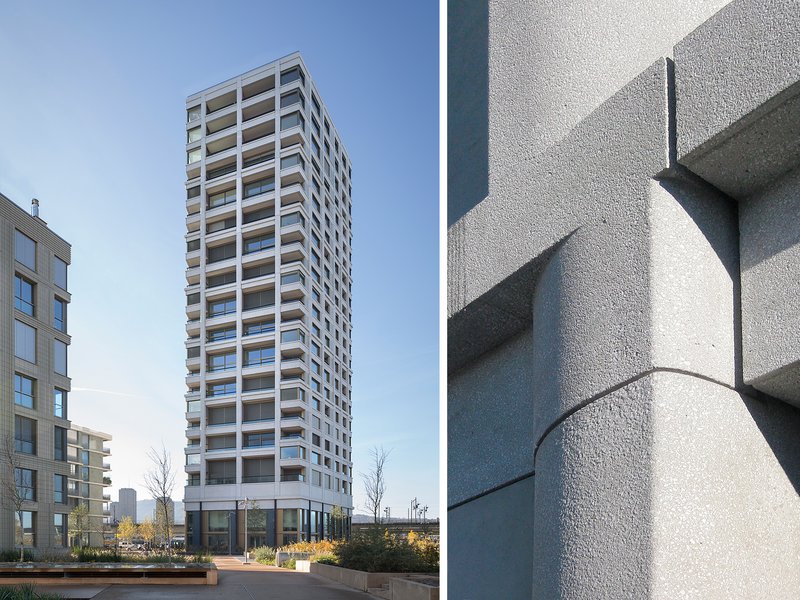 The Zölly high-rise evolves, the same as the other two high-rises – the Prime Tower and the Mobimo Tower – from the geometry of a polygon. The obtuse angles defy any generation of corners and boundary definitions, while their free position defines a polyphonic triad within the silhouette of City West.

The two-storey base slightly projects towards the south-east and, along with the lobby hall, orients itself towards the square and the direct access to the biking and pedestrian path of the «curved track». Characteristic for the tower’s overall appearance are the 3.5- and 4.5-room flats arranged on the front side with their 1.5-storey-high rooms and open loggias at the corners of the building. On the intermediate floors, two 2.5-room flats surround these higher rooms and are visible at the building corners and along the folds of the longitudinal façades. The same order is expressed by the repeated rhythm of the striking horizontal bands, which penetrate the vertical pilaster strips. On the longitudinal façades, the relief consisting of surfaces of varying depths is continued by the ends of the window sills. The sand-blasted finish of the double-layered concrete elements with gleaming white marble as aggregate and darkened cement paint imbue the Zölly Tower with its own nobility, without a hint of envy of the glass and travertine claddings of its neighbours.

Rarely has the unity of internal structure and external appearance been implemented as consistently and precisely as in this residential tower. The differentiated sequences of rooms and room heights that stage the view correspond to the subtle tectonic articulation of the concrete elements. The plastic façade with its gentle play of shadows lends the striking building emotional accessibility.