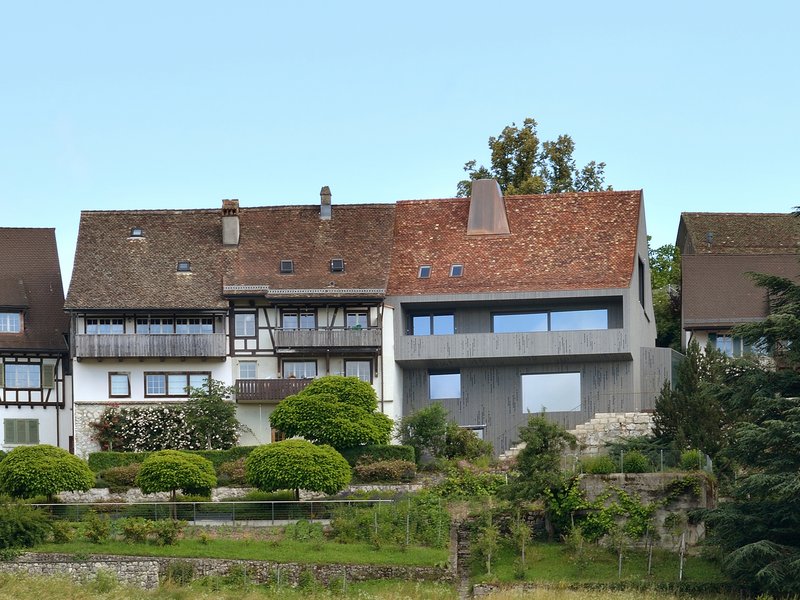 The Lendenmann House is part of the historical fabric of the medieval town of Regensburg near Zurich. Set in the eastern foothills of the Jura Mountains, Regensberg enjoys spectacular views of the surrounding countryside. The two-storey half-timbered house on a steep southern slope was in poor condition. The decision was thus made in cooperation with the townscape preservation authorities to undertake a partial demolition and rebuild the house within its original volume. Two half-timbered façades and a vaulted cellar were preserved and placed under monument protection. Three sculptural apartments could then be realised within the contrasting context of the small-scale town structures and the sweeping vistas onto the Zurich lowlands. Inside, open, white spaces meander between wood-panelled chambers, with changing levels and ceiling heights making the sequence of rooms into a suspenseful three-dimensional experience offering new sight lines and lighting situations around every corner. Like a skin, the new façade of pre-greyed spruce wraps itself around the edges of the protected half-timbered fronts. A »chimney« that conducts light up into the attic, a projecting bay window and sliding doors reinterpret local elements and articulate the exterior. The semi-transparent wood cladding sports a regionally based ornamental pattern, milled out of the wood in varying densities. The new façade thus presents itself as a delicate veneer that gives rise to a subtle play of light and shadow in the indoor and outdoor areas depending on the time of day.