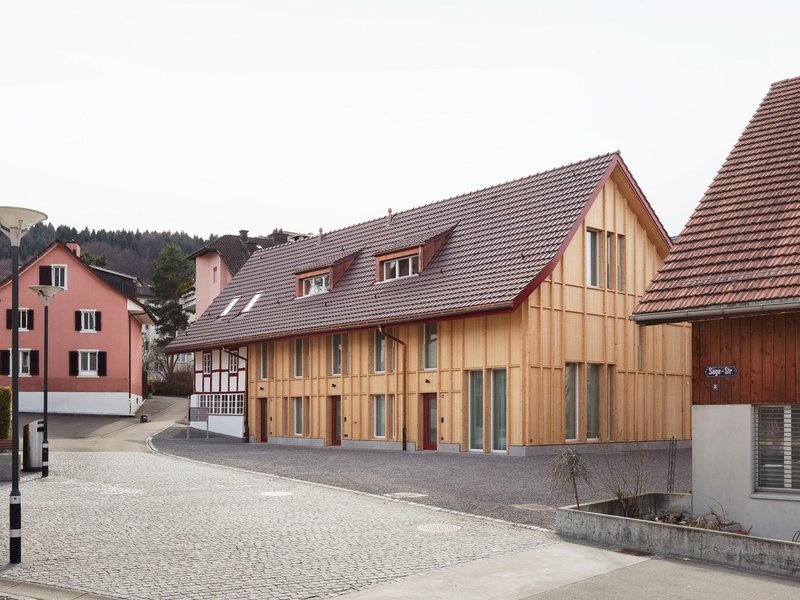 The project set out to gently renovate the farmhouse and replace the barn with new living space. Three vertically organised apartments were arranged within the existing volume. All units thus benefit from direct access to the village street as well as to the garden in the back and offer individualised, sheltered bedrooms on the attic storey. Due to the split-level design, each of the private rooms has three different levels, giving each its own orientation and special spatial quality. The two middle units extend into the existing side gables, whose volumes are perceptible in the high-ceilinged living room/ kitchen spaces. The high ceilings bring more light into the depths of the elongated flats. In the third and narrowest unit, a two-storey live-in kitchen opens onto the street, a space reminiscent of the still-existing wagon shed. Full timber construction was chosen for the new building. The timber frame is on the outside rather the inside and is left rough to evoke the former barn. Joining the façade elements in a certain way has enabled the matter-of-fact integration of large windows. The original appearance of the multipurpose structure has thus been maintained without the new building competing in any way with the old farmhouse. Inside, the smooth wooden walls have been given various finishes, creating surprisingly modern living spaces.