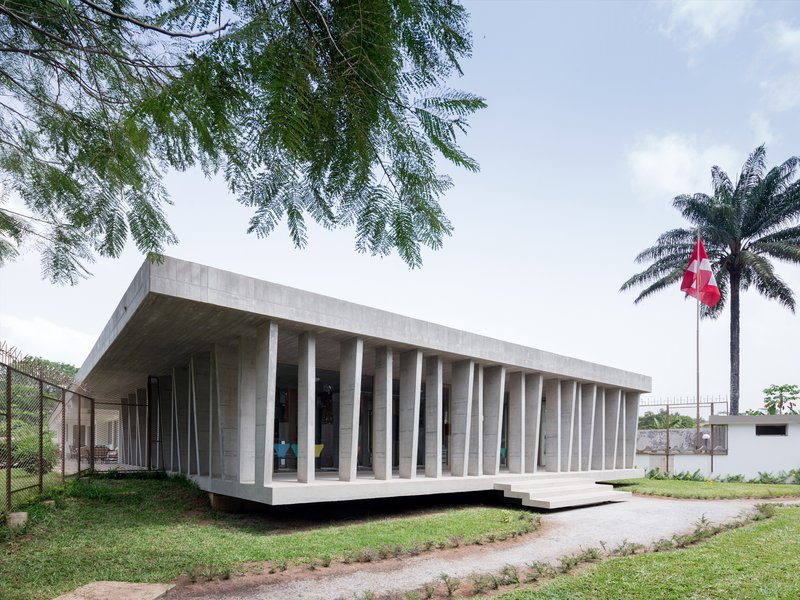 Until the summer of 2015, the Swiss Confederation was represented in Côte d’Ivoire by an embassy located in Abidjan’s Plateau district, in an upper storey of an office building. And then in 2013 the Office Fédéral des Constructions et de la Logistique (OFCL – Swiss Federal Office for Buildings and Logistics) decided to acquire the former residence of the Norwegian ambassador in the city’s attractive Cocody district, planning to renovate and extend the existing building in order to house its new embassy there. The building stands on a generous plot with magnificent trees. The existing villa, dating from the 1960s, was sturdy and well laid-out, its horizontal design divided into regular structural units and opening onto the grounds. The project therefore involved converting a private residence into a workplace fulfilling a representative function, one that would host the Swiss Federal Department of Foreign Affairs mission, with its diplomatic and consular sections, as well as an office of the Swiss Agency for Development and Cooperation (SDC). The new building needed to fulfil the following four objectives: to ensure that the embassy could function effectively in its new setting; to respect the site and the existing villa; to take the specific local climate conditions of Côte d’Ivoire into account; and, finally, to embody Swiss values.