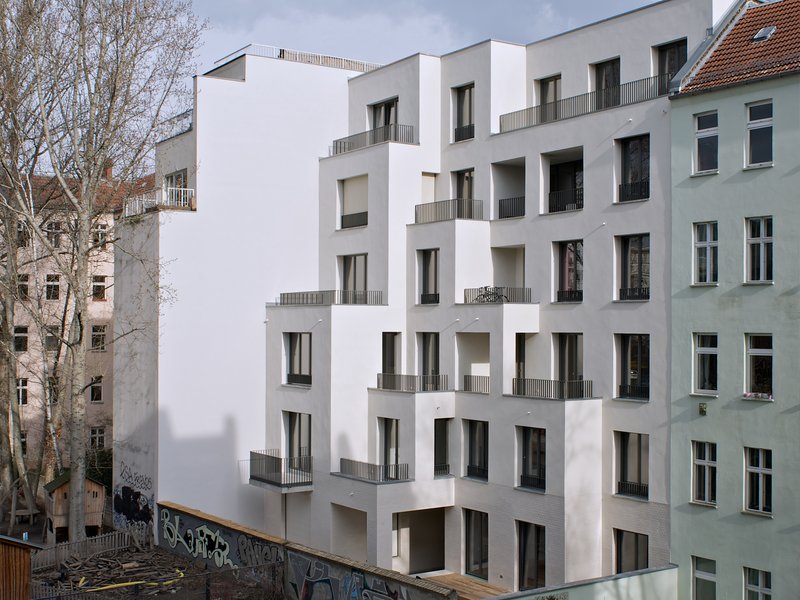 Private housing in rapidly redensifying Berlin increasingly depends on exploiting the spatial and atmospheric potential of back courtyards. This project for rebuilding a transverse rear wing sees itself as a model solution for modern rental apartments in the Berlin tradition. Creating maximum volume within the given specifications becomes its own architectural theme. As an antithesis to the open form of the garden facade, a courtyard façade has been created that with its dark wood window frames, scaled over-height openings and deep embrasures continues a predefined rhythm.

The plaster façades and window soffits, along with glazed ceramic bricks in the base, make for surfaces that combine roughness, glimmer and shine, shimmering in subtly changing tones to add a note of refinement to the usual look of such buildings. The quality of a flexible apartment typology characteristic for Berlin apartment blocks is translated into a maximum variety of floor plans.

Eighteen flats of different sizes and atmospheres are designed for future tenants representing a broad social spectrum. The variously organised units – whether extending from front to back, confined to a single storey, wrapped around an inside corner or designed as two-storey duplexes – are arranged on the floors either individually or in groups of up to four, all accessed via a spacious, brightly lit internal staircase.

The approach to a work leads us through a garden with branching paths. An erroneous path, guided by role models, dreams, memories, fixed ideas, pragmatisms, doubts, resistances and temptations. This wilderness of possibilities in decision-making against the background of manifold facets of previous activities stands in its twilight against a sterile laboratory situation. The pleasure for us is to distil "solutions" from the impure, the disparate and the contradictory. Afterwards a veil may lie spread over the result, which only vaguely reveals something about its genesis, because it should measure itself on the world, from which it derives and for which it can become a reference.