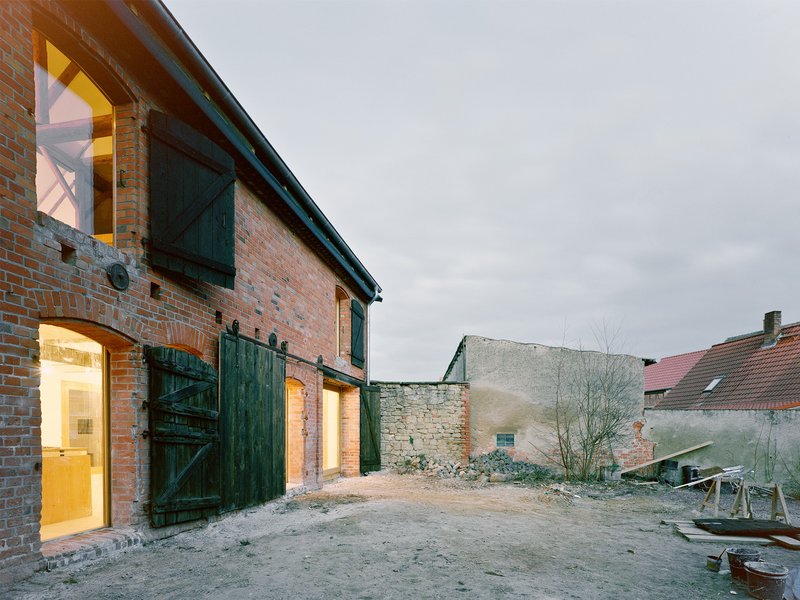 The project »Haus Stein« is a conversion of a brick barn from the 1930s into a holiday home. The architectural concept behind the project is to preserve the appearance and basic character of the building ensemble. The carefully implemented modifications to the façade are barely noticeable in the absence of residents. Only when the wooden shutters and gates are opened are the interior and its new appearance revealed, the precise execution creating a deliberate contrast to the rough, unchanged exterior. When the house is not being inhabited, it turns into a barn again. The interior is organised by the steel beams supporting the Prussian vaulted ceiling. The room partitions and openings in the ceiling are aligned with their positions. The space is divided into two areas of use. While the lower storey with its harder materials and cooler tones is primarily intended to be used during the daytime, quieter rooms are located on the upper floor. Here there is sufficient space available to withdraw despite the openness of the building. As far as it was technically possible, sustainable building materials were used, such as a soft fibreboard inner insulation, flax insulation in the roof and clay plaster on the walls. A photovoltaic and solar thermal power installation on the premises, in combination with a wind power generator, ensure a degree of independence in terms of energy supply.