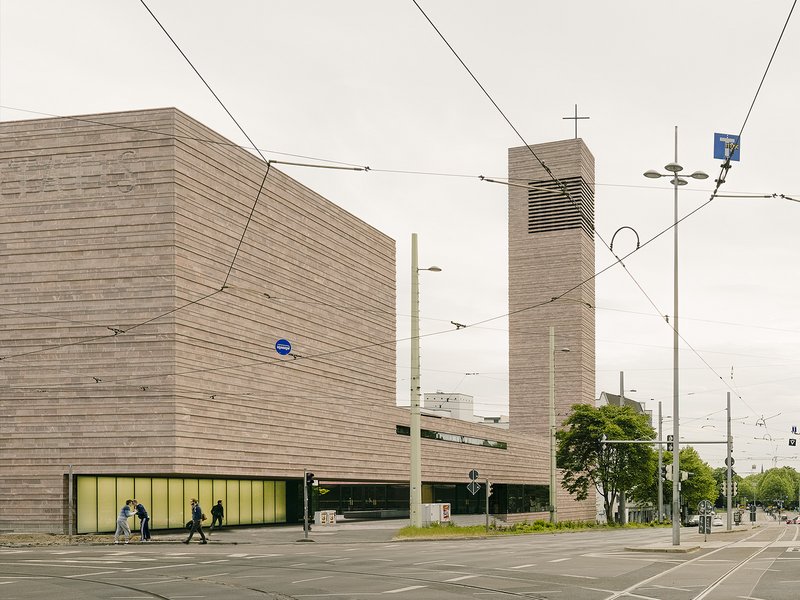 With the building of the new church, the Trinitatis parish has returned to the city centre of Leipzig – over seventy years after the destruction of the original building during the war and an odyssey which, due to political circumstances, saw them move between a series of temporary accommodations. The façade of locally typical Rochlitz porphyry symbolises a desire for permanence, and the precise setting reflects the connection with the city. The building was erected on a triangular brownfield site opposite the New Town Hall. The community centre extends between the main church building and the bell tower. The courtyard area invites the public to pass through, serving as a meeting place for visitors before and after church services, concerts or assemblies. With a rainwater reservoir and vertical solar panels, the bell tower also contributes to the semi-autonomous operation of the building. The German Federal Environmental Foundation supported the comprehensive energy concept as part of two research projects. There is no threshold between the large church space and the smaller weekday chapel. Nonetheless, the lighting and orientation define two religious spaces with different atmospheres. On the ground floor, the large church window inscribed by Falk Haberkorn with biblical texts serves as an interface between the secular and the religious space: it awakens curiosity and encourages individuals to come closer.