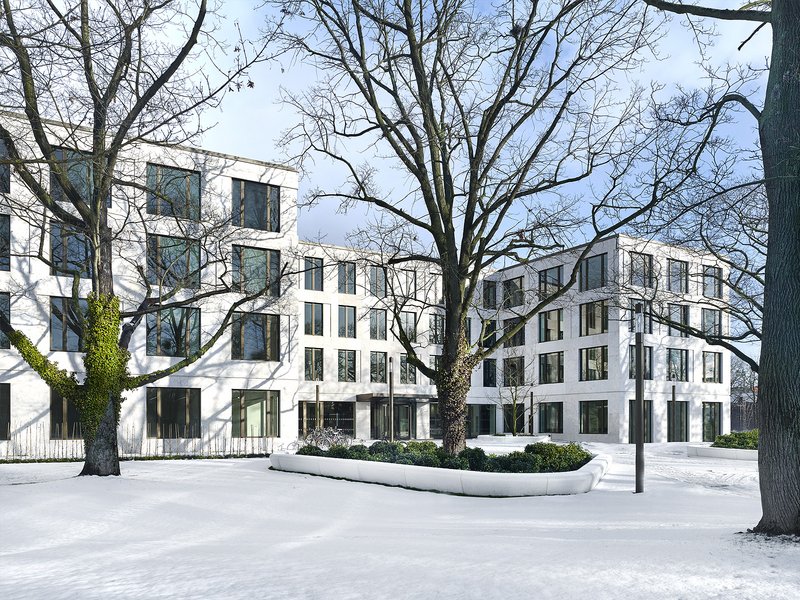 The new office and administration building for the Kassenärztliche Vereinigung Brandenburg and the Landesärztekammer Brandenburg was developed on a building site along Pappelallee in Potsdam. The structure frames Georg-Herrmann-Allee, with the street-facing façade aligned with the adjoining development to the north. Conceived as a freestanding solitaire, the building is embedded in a park-like environment with mature trees. The structure conveys a monolithic impression through two enclosed courtyards and an entrance plaza that opens to the street. A conference area on the ground floor surrounds a central, two-storey hall, which is lit by a large »roof lantern«. Staff can access the office levels through a centrally located main entrance and staircase without interrupting conferences or meetings. Ceiling height and window openings extending over two or three expansion grids create a broad façade that reflects an open and modern management style. The bright shell limestone used for the façade brings to mind the spirit of traditional Potsdam architecture. A quasi-abstract branch tracery design can be followed through each storey along the surfaces of the pillars, varying in intensity from front to back and creating a gradual transition from light to heavy. Following this logic to its inevitable conclusion, the basement level has been completed in a flat design and offset from the upper storeys by a shadow gap. While the ground floor, with reception and conference areas, canteen and rental premises, is open to the public, the floors above, which are laid out as double-wing office storeys, are accessible only to staff.