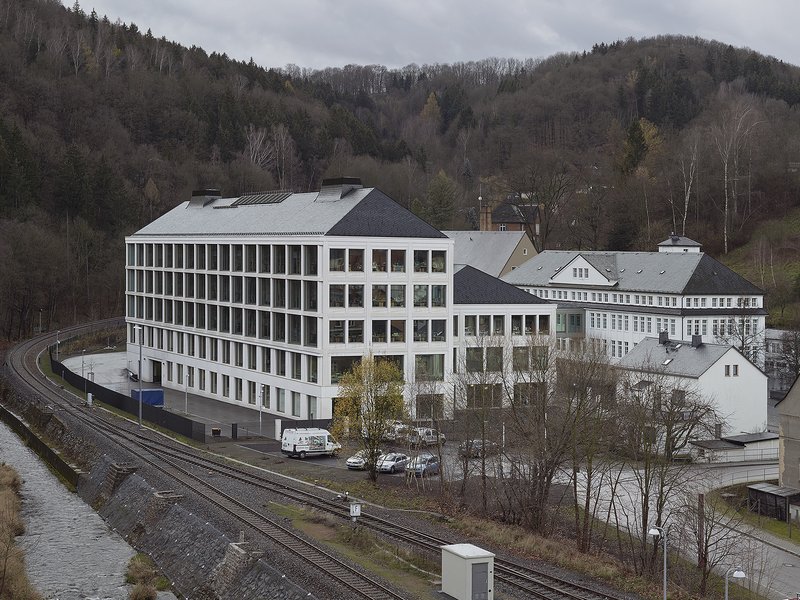 It’s really quite simple: a broad, low-slung building for working on the machines, and a tall, slim building for manual work. The two buildings are connected by a stairway hall and set side by side in such a way that the lower building takes up the eaves edge of the one on the opposite side of the street, while the studio workplaces for precision work face the green slopes of the Müglitz Valley. The positioning of the new manufactory wing forms an ensemble with the historic buildings occupied by A. Lange & Söhne and takes advantage of the specific conditions of the site – in particular the narrow valley cross-section, which keeps the slanting morning sun away from the studio façade for most of the year. Rotating the workplaces toward the north ensures non-blinding daylight across the entire east side of the building. An extra layer in the studio façade provides in addition a climatic and hygienic buffer as well as a circulation zone from where visitors have a frontal view of the work going on at the watchmaker tables. The architecture of the new additions is based on the same tectonic principles of the articulated wall that shapes the appearance of the heritage buildings. The consistent use of prefabricated components gives the elegantly proportioned façade relief the desired degree of precision. The basic theme is varied on each side of the building depending on the functions within, and accentuated in the parapets by oblique »bar lines« devised by the artist Peter Suter.