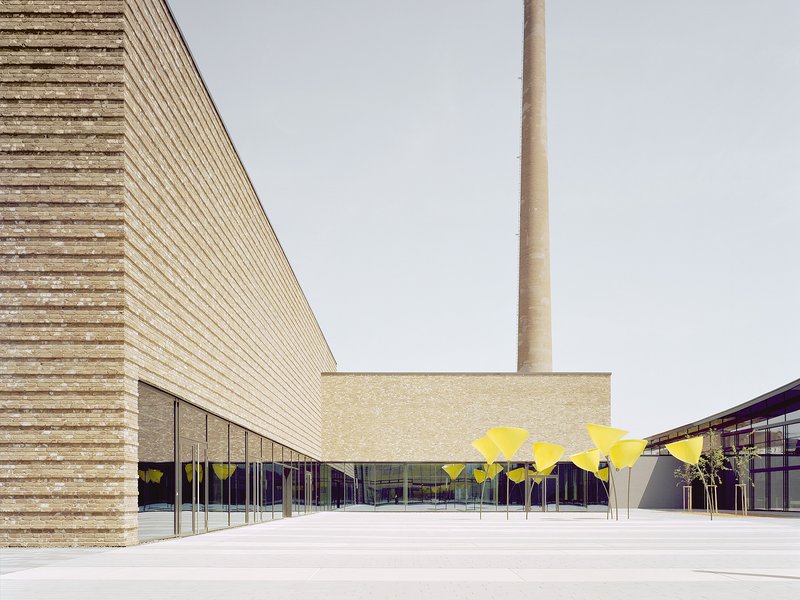 After the client, the Alfred Kärcher GmbH & Co. KG company, had grown beyond the limits of its historical premises, it purchased a former brick factory with an area of 130,000 square metres for future expansion, on a site separated from the headquarters only by a railway track. At the end of 2012, the client held an international competition for the conversion of the new premises and chose the design by Reichel Schlaier Architekten as winner. In addition to offices, a lecture hall as well as showrooms with presentation areas and a café were planned. The design groups this spatial programme around an area that became a new plaza. The extension was linked with the existing company premises by a pedestrian bridge. The visitor and customer centre now houses exhibition areas and seminar rooms as well as a shop and a café. The L-shaped building with its sweeping façades and exposed masonry delimits a plaza to the north and west. The brick used for the exterior harks back to the historic brick factory, which is also recalled by the preserved chimney, while also creating a clear contrast to the fully glazed buildings designated for offices and events. The presentation and exhibition spaces, lit mainly from above, allow for expansive and undivided brick surfaces that frame the plaza and immerse it in a warm light when the sun is shining.